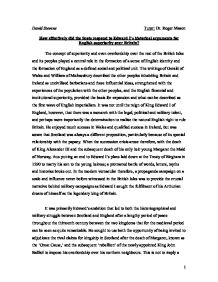 How effectively did the Scots respond to Edward I's historical arguments for English superiority over Britain?

David Stevens Tutor: Dr. Roger Mason How effectively did the Scots respond to Edward I's historical arguments for English superiority over Britain? The concept of superiority and even overlordship over the rest of the British Isles and its peoples played a central role in the formation of a sense of English identity and the formation of England as a defined social and political unit. The writings of Gerald of Wales and William of Malmesbury described the other peoples inhabiting Britain and Ireland as uncivilised barbarians and these influential ideas, strengthened with the experiences of the population with the other peoples, and the English financial and institutional superiority, provided the basis for expansion and what can be described as the first wave of English imperialism. It was not until the reign of King Edward I of England, however, that there was a monarch with the legal, political and military talent, and perhaps more importantly the determination to realise the natural English right to rule Britain. He enjoyed much success in Wales and qualified success in Ireland, but was aware that Scotland was always a different proposition, particularly because of its special relationship with the papacy. When the succession crisis arose therefore, with the death of King Alexander III and the subsequent death of his only heir young Margaret the Maid of Norway, thus putting an end to Edward I's plans laid down at the Treaty of Birgham in 1290 to marry his son to the young heiress; a protracted battle of words, letters, myths and histories broke out. In the modern vernacular therefore, a propaganda campaign on a scale and influence never before witnessed in the British Isles was to provide the crucial narrative behind military campaigns as Edward I sought the fulfilment of his Arthurian dream of himself as the legendary king of Britain. It was primarily Edward's ambition that led to both the historiographical and military struggle between Scotland and England after a lengthy period of peace throughout the thirteenth century between the two kingdoms that for the medieval period can be seen as quite remarkable. ...read more.

rightfully deserves, it seems fair to claim that he was to emerge victorious from this particular battle in the Anglo-Scottish war of historiography. Foremost of Edward's arguments was his appeal to history and the processus sent to the pope by Bisset and his accomplices deals successfully with these claims. They stress that Edwards 'right' can only be defended by his use of events "not recent but remote in time," relying on evidence from "a time for which no memory exists."6 The basis of the argument seems to derive from recognition of the fact that situations or circumstances do not remain constant over time. Bisset concedes that Arthur did indeed conquer Scotland but points out that amongst other problems of the lack of knowledge of events so far in the past, such a fact could not be used to justify situations as they are in the present day. He cites the Roman Empire as his example pointing out that they no longer "lord it over the entire world."7 It would therefore be unwise to attach too much authority to historical conditions which altered long ago since "lordship over possessions and over kingdoms are distinct in the law of nations, and are frequently transferred under various titles and for various reasons from people to people and from nation to nation."8 Perhaps more tellingly he instructs Boniface VIII of Edward's background, arguing that while the descendants of Brutus once ruled the island of Britain, the Britons were later conquered by the Saxons, who in turn fell before the Danes. When the Saxons finally overcame the Scandinavians they were to be conquered once again by the Normans. Edward's use of British history therefore becomes irrelevant since Edward "has not succeeded the Britons but the Normans... From this it is clear that as regards those matters which prevailed in antiquity, many changes happened by the very nature of things, which is unable to remain in the same state."9 These arguments would certainly seem to undermine those in Edward's letter, though it is essential not to lapse into an overly modern reading of this medieval text. ...read more.

surely Fiona Watson is correct in saying that such a notion as that of popular sovereignty from an early period in Scotland, "would have been greeted with complete incomprehension by Bruce, not to mention his Stewart descendants."20 Watson also goes on to illustrate the Declaration was not particularly effective since only months after it's composition, Bruce faced rebellion from many of the 'signatories' of the Declaration, "perhaps galled by the obvious discrepancy between the version of events portrayed there and their own memories."21 The efficacy of most of the writings from Bruce's time therefore, came from their attempt, and ultimately their considerable success, in justifying the Bruce claim to the throne and in turn to have a unifying effect on what was a trenchantly divided kingdom, and played a significant role in the creation of a new sense of Scottish nationhood. Perhaps the key outcome of Scotland's struggle to preserve its independence from England, then, was the accelerated growth of national consciousness among many different groups within Scottish society during the latter thirteenth century and beyond, and the real efficacy of the Scottish writings of the time were to this end. Both the ruling classes, comprising all secular and church government, and the vast majority of the Scottish people, whose resources were essential to the success of the prolonged Wars of Independence, together arrived at a "fuller conception of the Scottish nation, its history, and its traditional forms of government."22 The production of historiography played a constitutive role in the development of national consciousness in Scotland. Master Bisset and later those who wrote to justify the reign of the Bruce's reproduced the larger political conflict in another form and through their appeals to history, as has been shown, were able to render illegitimate Edward's claims to English superiority of Scotland. While not creating a sense of Scottish identity, as this was necessarily present before their writings, they served to galvanise this idea and so played a crucial role in the continuing independence of Scotland. ...read more.