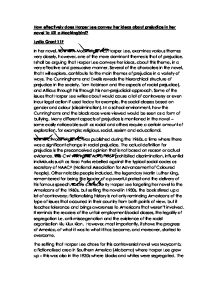 How effectively does Harper Lee convey her ideas about prejudice in her novel To Kill a Mockingbird?

How effectively does Harper Lee convey her ideas about prejudice in her novel To Kill a Mockingbird? Lydia Grant 11F In her novel, To Kill A Mockingbird, Harper Lee, examines various themes very closely, however, one of the more dominant themes is that of prejudice. I shall be arguing that Harper Lee conveys her ideas, about this theme, in a very effective and persuasive manner. Several of the characters in the novel, that I will explore, contribute to the main themes of prejudice in a variety of ways. The Cunninghams and Ewells reveals the hierarchical structure of prejudice in the society, Tom Robinson and the aspects of racial prejudice), and Atticus through his through his non-prejudicial approach. Some of the issues that Harper Lee writes about would cause a lot of controversy or even incur legal action if used today for example, the social classes based on gender and colour (discrimination). In a school environment, how the Cunninghams and the black race were viewed would be seen as a form of bullying. Many different aspects of prejudice is mentioned in the novel - some easily noticeable such as racial and others require a certain amount of exploration, for example: religious, social, sexism and educational. To Kill a Mockingbird was published during the 1960s, a time where there was a significant change in racial prejudice. The actual definition for prejudice is the preconceived opinion that is not based on reason or actual evidence. The Civil Rights Act of 1964 prohibited discrimination, influential individuals such as Rosa Parks rebelled against the typical social codes as secretary of NAACP (National Association for Advancement of Coloured People). Other notable people included, the legendary Martin Luther King, remembered for being the leader of a powerful protest and the delivery of his famous speech, I Have a Dream. By Harper Lee targeting her novel to the Americans of the 1960s, but setting the novel in 1930s, the book stirred up a lot of controversy; fictionalizing history is not only ...read more.

Harper Lee presents social prejudice in Maycomb as like a caste system, set in stone, that one is born into prejudice and nothing can be solved. This demonstrates that not being prejudice is rebelling against the ways of Maycomb County. Lee may also be shedding light on reality, and showing the readers how class and social tags can affect the way one is treated amongst ones' community. In To Kill a Mockingbird, religious prejudice is shown through Harper Lee's presentation of religion and the church. Black people in To Kill a Mockingbird are affected by religious prejudice as well as the Radleys. The readers view this when Calpurnia decides to take Jem and Scout to 'First Purchase African M.E Church'. On pg. 130 it says 'Negroes worshipped it on Sundays and white men gambled in it on weekdays', just by the comparison it shows evidence of disrespect. Especially, as it's a religious place of worship and they are known to be holy and people are gambling inside it (gambling also being a sin) adds to the religious prejudice. This is effective because it shows the readers how insignificant the whites viewed the property of the blacks. The reader can also observe the religious prejudice through the character named Lula who, with no hesitancy, stated their unwanted presence on pg. 131 'You ain't got no business bringin' white chillun here - they got their church, we got our'n.' Through this, we see the segregation and prejudice (social as well as religious) in the way that Lula mistreats Scout and Jem. This is effective because it demonstrates the social tension that existed at the time between the blacks and whites. Harper Lee shows a combination of prejudices i.e. religion and racism. Although Maycomb County is a strong religious community, there are divisions within this including 'foot-washing Baptists' that 'believe anything that's pleasure is a sin'. (pg.49). ...read more.

The Scotboroughs Case is paralleled to Tom Robinsons Case; the difference, there were two prostitutes that were committing vagrancy and diverted the trouble and stated that a group of men raped them. There was no medical evidence, and eight out of nine men were convicted whereas two of the men had physical hindrances which would've made rape, physically not possible (Tom Robinsons' arms). Additionally, society's attitude to the defendants were the same, they were both infamous and the cases attracted a lot of attention. Furthermore, Harper Lee included heavy prejudice (racism, hierarchy system) and minor prejudice (religious), her main family were 'prejudice-free', and unbiased at the end, so showed that there is positivity wherever there is negativity. Scout, the narrator, developed greatly up in the two year period of the novel, and we see the difference in her thoughts - her viewpoint helped everyone to see prejudice in such a blunt light, which showed the crude and unbelievable 'rules' within communities; making it hard to ignore. By demonstrating a wide variety of prejudice, it shows how America's attitude was and how ignorant the American appeared to be. In doing that, it brought awareness to the readers at the time, and helped people to reflect on their community, their current grudges and to possibly correct them. People gather from the novel, that if more people spoke up (Dolphus Raymond, Miss. Maudie) within the community besides Atticus, there could have been more of an impact. In saying this, one could say that her approach to prejudice proved a definite desire for change in her society - in this; I believe she achieved her purpose. By fictionalizing history and writing this novel, it has been a positive educative tool, teaching tolerance subliminally and slowly allowing the readers to develop awareness through the narrator. It was palpable to me, that moralistic characters such as Atticus helped people to get into thinking like other characters due to Atticus' maxim 'standing in someone else's shoes'. Harper Lee wanted change. ...read more.