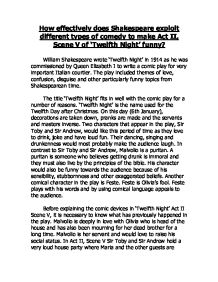 How effectively does Shakespeare exploit different types of comedy to make Act II, Scene V of 'Twelfth Night' funny? William Shakespeare wrote 'Twelfth Night' in 1914 as he was commissioned by Queen Elizabeth I to write a comic play for very important Italian courtier. The play included themes of love, confusion, disguise and other particularly funny topics from Shakespearean time. The title 'Twelfth Night' fits in well with the comic play for a number of reasons. 'Twelfth Night' is the name used for the Twelfth Day after Christmas. On this day (6th January), decorations are taken down, pranks are made and the servants and masters inverse. Two characters that appear in the play, Sir Toby and Sir Andrew, would like this period of time as they love to drink, joke and have loud fun. Their dancing, singing and drunkenness would most probably make the audience laugh. In contrast to Sir Toby and Sir Andrew, Malvolio is a puritan. A puritan is someone who believes getting drunk is immoral and they must also live by the principles of the bible. ...read more.

Is there no respect of place, persons, nor time in you?" (Act 2 Scene 3, Line 75) Maria, Feste, Sir Toby and Sir Andrew are furious with him and want revenge. Maria then thinks up a plan of writing a letter from Olivia (The one he loves) to Malvolio. It consumes of Olivia's heart liking Malvolio and instructs him on what to do. "Maria: I will drop in his way some obscure epistles of love; wherein, by the colour of his beard, the shape of his leg, the manner of his gait, the expressure of his eye, forehead, and complexion, he shall find himself most feelingly personated. I can write very like my lady your niece: on a forgotten matter we can hardly make distinction of our hands." "Sir Toby: He shall think, by the letters that thou wilt drop, that they come from my niece, and that she's in love with him." (Act 2 Scene 3, Line 131) Most of William Shakespeare's humour in "Twelfth Night" is from a comic device called dramatic irony. ...read more.

There is also an example of psychological comedy where the character Sir Toby says: "To anger him, we'll have the bear again; and we will fool him black and blue, shall we not, Sir Andrew?" This quote makes the audience aware that Sir Toby, Sir Andrew and Maria really want to make a fool out of Malvolio and get their revenge, by playing with his mind, hopes and dreams. In my personal opinion, it was a good idea that William Shakespeare placed Malvolio, who was both a puritan and very proud, as the central comical character as he was easy to make mock and the audience would have loved to hate him. The play due to its many comical devices is quite humorous and the appearance and attitude of the main character, Malvolio, and the contrast toward Sir Toby and Sir Andrew made it more amusing for the audience in Shakespearean times to laugh. In comparison to Shakespearean times, today we are very different and William Shakespeare wouldn't receive the same amount of laughter now, as he would have done in his own life. All of William Shakespeare's comical devices would have made his selected audience laugh which was the effect he was looking for. ...read more.