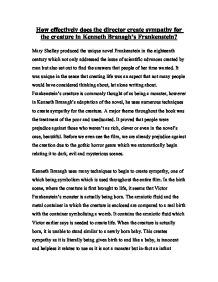 How effectively does the director create sympathy for the creature in Kenneth Branagh's Frankenstein?

How effectively does the director create sympathy for the creature in Kenneth Branagh’s Frankenstein?

Mary Shelley produced the unique novel Frankenstein in the eighteenth century which not only addressed the issue of scientific advances created by man but also set out to find the answers that people of her time wanted. It was unique in the sense that creating life was an aspect that not many people would have considered thinking about, let alone writing about. Frankenstein’s creature is commonly thought of as being a monster, however in Kenneth Branagh’s adaptation of the novel, he uses numerous techniques to create sympathy for the creature. A major theme throughout the book was the treatment of the poor and uneducated. It proved that people were prejudice against those who weren’t as rich, clever or even in the novel’s case, beautiful. Before we even see the film, we are already prejudice against the creation due to the gothic horror genre which we automatically begin relating it to dark, evil and mysterious scenes.

Kenneth Branagh uses many techniques to begin to create sympathy, one of which being symbolism which is used throughout the entire film. In the birth scene, where the creature is first brought to life, it seems that Victor Frankenstein’s monster is actually being born. The amniotic fluid and the metal container in which the creature is enclosed are compared to a real birth with the container symbolising a womb. It contains the amniotic fluid which Victor earlier says is needed to create life. When the creature is actually born, it is unable to stand similar to a newly born baby. This creates sympathy as it is literally being given birth to and like a baby, is innocent and helpless it relates to use as it is not a monster but in-fact an infant something that without influence is completely harmless and no less a human. Later the creature is being compared to Jesus. It was hanging helplessly in the chains, almost as if on the crucifix, and later comes back to life. Jesus was our savior and was given to this world by un-natural means by God. This is similar as the creature is created and not born. This evokes sympathy from the audience as it would seem that it had been killed innocently, having just been born. At the moment of its birth, the creature was entirely benevolent and innocent, even if he looked hideous; he had the same innocence as a newborn child. He did not understand anything, but tried to learn everything, he was born in to the world by a painful and horrific way.

When Victor is bringing the creature to life, the music is fast paced and jumpy which effectively creates tension and reflects Victor’s state of mind with him being so anxious to see whether his creation is a success. When the creature if finally born, there is a change in atmosphere when the music stops immediately creating suspense. Consequently, the diegetic sound is emphasised and the audience can hear water dripping and the chains rattling. This effectively results in the gothic genre becoming more distinct.

The director uses dull and dark scenes to make the creature seem distorted and possible inhuman. Because there isn’t much light used, the audience never clearly see the creatures face which in effect gives the impression it has no real identity. As well as the dull lighting, the electricity Victor uses for his creation acts as a source of light, but makes the room ‘flash.’ This lighting generates a dark and mysterious atmosphere that continues to add to the gothic genre. As a result of this, the audience expects the creation to be evil, therefore, once again demonstrating the issue of people being prejudice and also the audience being prejudice to the creature.

In the following scene, chased by a mob, when Victor is being chased by the creature, there is a close up of the professor, half merged into the action of the film. The things the professor is saying acts as Victors conscience, telling him the creature is evil and will seek revenge. This effects the audience because before the creature has done anything wrong, Victor already has the opinion that it is evil, therefore creating sympathy as the creature is innocent of any wrong doing and is being judged purely on his grotesque appearance.

When the creature first comes out into the street, prejudice and rejection are demonstrated as the woman accuses the creature of starting the plague. Despite his innocence, the creature is discriminated against as a result of his appearance. This is relevant to modern day society as many people are judged on their looks. Although it shouldn’t be an issue, it is a major one as many people in our times are outcasts because they are not what society would class as ‘attractive’ or normal.

When the creature is backed up into the corner by the mob, the camera pans around making the audience relate to the creature as it seems like it is surrounded, resulting in the viewers empathising with the creature. The director also uses a high angle shot as the creature jumps into the cart of bodies. This shot allows the audience to fully see what the creature is plummeting into and see that he blends in with the dead bodies. By him doing this, it proves he is quick thinking and intelligent - not just a monster like what  the mob perceived him as being.