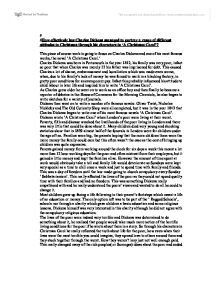 How effectively has charles dickens managed to portray a range of different attitudes through his characters in the novel &quot;a christmas carol&quot;

# #How effectively has Charles Dickens managed to portray a range of different attitudes to Christmas through his characters in 'A Christmas Carol'? This piece of course work is going to focus on Charles Dickens and one of his most famous works, the novel 'A Christmas Carol.' Charles Dickens was born in Portsmouth in the year 1812, his family was very poor; infact so poor that when Charles was merely 12 his father was imprisoned for debt. This caused Charles a lot of shame, embarrassment and humiliation which was made even worse, when, due to his family's lack of money he was forced to work in a blacking factory, in pretty poor conditions for an even poorer pay. Infact this probably influenced his attitude to child labour in later life and inspired him to write 'A Christmas Carol'. As Charles grew older he went on to work as an office boy and then finally he became a reporter of debates in the House of Commons for the Morning Chronicle, he also began to write sketches for a variety of journals. Dickens then went on to write a number of a famous novels: Oliver Twist, Nicholas Nickleby and The Old Curiosity Shop were all completed, but it was in the year 1843 that Charles Dickens began to write one of his most famous novels 'A Christmas Carol'. Dickens wrote 'A Christmas Carol' when London's poor were living at their worst. Poverty, filth and disease wrecked the livelihoods of the poor living in London and there was very little that could be done about it. ...read more.

Then the third and forth staves are separated into the visits of the second and third spirits, the 'Ghost of Christmas Present' and the 'Ghost of Christmas Future'. They tell of Scrooges life and how if he doesn't change he will come to a very bitter end. The fifth and final stave is how Scrooge has reformed his character he is a completely different person and he helps to change the lives of everyone who knows him. Dickens uses many skills and techniques to portray contrasting views on Christmas through his characters. This way he managed to open the eyes of so many people living in London, he convinced them that the poor were not lazy but good, hardworking, honest people who deserved a lot more than they got. In his novel he displayed two main, contrasting views on Christmas. One came from Scrooge, the typical rich man who did not see any reason to be jolly at Christmas as it was a time when you paid bills but had no money. ' What's Christmas time to you but a time for paying bills without money, a time for finding yourself a year older, and not an hour richer.' The other contrasting view comes from the poorer people, whom Dickens always displays in a good light. There are two main characters in the novel that come from poorer backgrounds, one is Scrooges clerk, the hardworking, honest Bob Cratchitt, the other is Scrooges very own nephew. He is very set against Scrooges point of view on Christmas. ...read more.

Five minutes, ten minutes, a quarter of an hour went by, yet nothing came.' This is significant because it shows a lot about Scrooges personality, he doesn't believe what is happening to be true but he is still very afraid of the next spirit; this is possibly because he knows it will only show him bad things about himself and his attitude to Christmas, however he feels very stupid at the fact he is actually scared; which is humorous for the reader. Throughout the novel Dickens subtly adds in many techniques that help to put the poor people in a good light. He makes a lot of contrasts between the poor and rich but for the first time in the third stave, he contrasts the poor peoples' awful homes with their high spirits. ' The sky was gloomy, and the shortest streets were chocked up with a dingy mist, half thawed, half frozen , who's heavier particles descended in a shower of sooty atoms...There was nothing very cheerful in the climate or the town, and yet was there an air of cheerfulness abroad that the clearest summer air and brightest summer sun might have endeavoured to diffuse in vain.' This is very important to the novel as it really reflects the poor peoples attitude to Christmas. It is very ironic because even though their living conditions are terrible and houses and streets were filthy with dirt, they are happy and high spirited, willing to help each other and making the most of the Snow and Christmas season. Dickens is once again reminding the reader of how good the poor people are. ...read more.