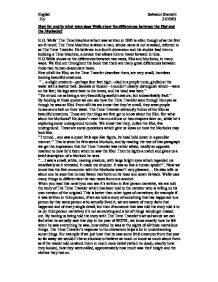 How far and in what ways does Wells show the differences between the Eloi and the Morlocks?

How far and in what ways does Wells show the differences between the Eloi and the Morlocks? H.G. Wells' The Time Machine which was written in 1895 is often though of as the first sci-fi novel. The Time Machine is about a man, whose name is not revealed, referred to as The Time Traveler. He believes in a fourth dimension and his studies lead him to building a Time Machine, a device that allows him to travel forward in time. H.G.Wells shows us the differences between two races, Eloi and Morlocks, in many ways. We find out throughout the book that there are many great differences between these two human-descendant races. First of all the Eloi, as the Time Traveler describes them, are very small, harmless looking beautiful creatures. ''...a slight creature-perhaps four feet high-clad in a purple tunic, girdled at the waist with a leather belt. Sandals or buskin-I couldn't clearly distinguish which-were on his feet; his legs were bare to the knees, and his head was bare.'' ''He struck me as being a very beautiful graceful creature, but indescribably frail.'' ...read more.

This is better than other types of narratives; for example if it was written in third person, if we are told a story of something that has happened to a person by that same person who actually lived it, we are aware of many facts that happened and of every single detail, but then if someone that was told the story told it to us (in third person narrative) it's not as exciting and a lot of things would get missed out. By having us being told the story with The Time Traveler's actual words we can feel what he actually saw that day in the year of 802701, we know exactly how he felt when he saw everything he saw, how exited he was at the sights of all these marvelous things. The Time Traveler's response to the characters helps a lot in understanding some things. For example if we just hear that he saw some little creatures from that year so far away we wouldn't be so shocked or believe as much or know as much about them as if the reader told us about them in much more detail (which he ...read more.

He regains confidence and coexists with them for a while. Then again, the reaction here was pretty different to the one with the Morlocks. Many of the devices used by Wells have been discussed. For example it being a person telling us what happened instead of the Time Traveler himself, like this we doubt if he survives or not, which adds up to the cliffhanging ending of 'whatever happened to the Time Traveler' (whose name we are never told), he left on his last trip, prepared, to never come back. Maybe he died, maybe he decided to stay and live and learn more of the ways of the Eloi. All these things make up a good story and make it enjoyable too, these characteristics would be lost if the story was told by the Time Traveler. Why? Because if it was him telling us the story, then we would know that he survived and therefore we know what happened to him. These elements add up to the dramatic effect of the novel and helps the reader understand how much could the human race possibly evolve and into what. English Salvador Stamatti 11y 31/10/03 ...read more.