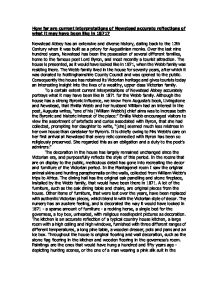 How far are current interpretations of Newstead accurate reflections of what it may have been like in 1871?

How far are current interpretations of Newstead accurate reflections of what it may have been like in 1871? Newstead Abbey has an extensive and diverse history, dating back to the 12th Century when it was built as a priory for Augustinian monks. Over the last nine hundred years, Newstead has been the possession of several different families, home to the famous poet Lord Byron, and most recently a tourist attraction. The house is presented, as it would have looked like in 1871, when the Webb family was residing there. The Webb family lived in the house for seventy years, after which it was donated to Nottinghamshire County Council and was opened to the public. Consequently the house has retained its Victorian heritage and gives tourists today an interesting insight into the lives of a wealthy, upper class Victorian family. To a certain extent current interpretations of Newstead Abbey accurately portrays what it may have been like in 1871 for the Webb family. Although the house has a strong Byronic influence, we know from Augusta's book, Livingstone and Newstead, that Emilia Webb and her husband William had an interest in the poet, Augusta writes, "one of his [William Webb's] chief aims was to increase both the Byronic and historic interest of the place." ...read more.

Despite this, great emphasis is placed upon the poet's connection with Newstead, which doesn't accurately reflect life in 1871, when the Webb family lived there. There is further evidence of Byron's influence in the gift shop, where there are many books and leaflets containing information about the poet. There are copies of his poetry books on sale, mugs and gift bags with his portrait displayed on them. Newstead Abbey exploits this link with Byron further by holding Byron evenings. The Byron Society meets annually at the abbey to discuss Byron's scandalous life and to read his poetry. There is even a Byron library - a collection of Byron paraphernalia focusing on Byron's chivalrous side. The collection includes decorative armour, helmets, boxing gloves, pistols and other sports artefacts. Pictures and text confirming his sporting expertise highlight this active, heroic image, which is ironic, as Byron was known to have a deformed foot. There are extracts from his speech in the House of Lords, when he defended the Luddite movement and images of him in Greece, supporting them against the invasion by Turkey. This all promotes a positive image of Byron, which is unrealistic and is a distortion of what it may have been like. ...read more.

For example the house now contains a gift shop and restaurant, as well as public toilets. Part of the gardens has become a child's play area, as well as containing a car park and cricket ground. Structurally and decoratively, the house is a realistic reflection of how it would've been for the Webbs, and careful consideration has gone into the decoration and furnishing of each room. The house was kept in the Webb family before it was donated to the Nottinghamshire County Council, meaning that a lot of the furniture and decoration was preserved from when the first generation of Webbs lived there. However in conclusion I think the image of Newstead is to some extent inaccurate of how it may have been in 1871. The Byronic significance of the house is too heavily promoted, in 1871 Byron had not lived in the house for over fifty years, and the role of the servants, and the children, is neglected for commercial reasons. Also the ghost evenings are not part of the Victorian heritage, and are simply used for attracting visitors. Heritage tourism plays too big a role for Newstead Abbey ever to be considered an accurate reflection of Victorian life. ...read more.