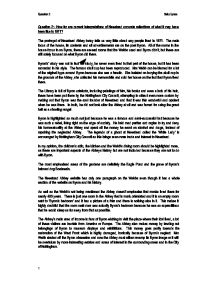 How far are current interpretations of Newstead accurate reflections of what it may have been like in 1871?

Question 2:- How far are current interpretations of Newstead accurate reflections of what it may have been like in 1871? The portrayal of Newstead Abbey today tells us very little about way people lived in 1871. The main focus of the house, its contents and all advertisements are on the poet Byron. All of the rooms in the house focus in on Byron, there are several rooms that the Webbs used and Byron didn't, but these are still solely focused on what Byron did there. Byron's' study was not in fact his study, he never even lived in that part of the house, but it has been recreated in his style. ...read more.

Byron is highlighted so much not just because he was a famous and semi-successful but because he was such a rebel, living right on the edge of society. He held mad parties and orgies to try and deny his homosexuality at the Abbey and spent all the money he earnt on alcohol and drugs, instead of repairing the neglected Abbey. The legends of a ghost at Newstead called the 'White Lady' is encouraged by Nottingham City Council as this brings even more trade and interest to Newstead. In my opinion, the children's attic, the kitchen and the Webb's dining room should be highlighted more, as these are important aspects of the Abbeys history but are not included because they are not to do with Byron. ...read more.

This makes it highly doubtful that the room next door was actually Byron's bedroom because he was so superstitious that he would sleep as far away from that as possible. The Abbey's main area of income is fans of Byron wishing to visit the place where their idol lived, a lot of these visitors are tourists from America or Europe. The Abbey also makes money by lending out belongings of Byron to museum displays and exhibitions. This money goes partly towards the restoration of the West Front which is highly damaged, ironically because of Byron's neglect. Mrs Webb started off the Byron obsession and now the Abbey must either revamp its Byron image or it will be overtaken by more interesting estates and areas of interest in the surrounding areas and in the City of Nottingham. Question 2 Sally Lynes 1 ...read more.