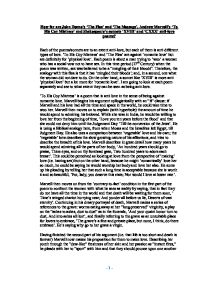 How far are John Donne's 'The Flea' and 'The Message', Andrew Marvell's 'To His Coy Mistress' and Shakespeare's sonnets 'XVIII' and 'CXXX' anti-love poems?

How far are John Donne's 'The Flea' and 'The Message', Andrew Marvell's 'To His Coy Mistress' and Shakespeare's sonnets 'XVIII' and 'CXXX' anti-love poems? Each of the poems/sonnets are to an extent anti-love, but each of them is anti different types of love. 'To His Coy Mistress' and 'The Flea' are against 'romantic love' but are definitely for 'physical love'. Each poem is about a man trying to 'woo' a woman who has a social vow not to have sex. In this time period (17th Century) when the poem was written, sex was believed to be a "mingling of their bloods". Therefore, the analogy with this flea is that it has 'mingled their bloods'; and, in a second, one what the woman did not dare to do. On the other hand, a sonnet like 'XVIII' is more anti 'physical love' but a lot more for 'romantic love'. I am going to look at each poem separately and see to what extent they can be seen as being anti-love. 'To His Coy Mistress' is a poem that is anti love in the sense of being against romantic love. Marvell begins his argument syllogistically with an "if" clause: if Marvell and his love had all the time and space in the world, he could take time to woo her. Marvell then moves on to explain (with hyperbole) ...read more.

Donne argues that by spilling his blood and hers, by killing the flea, she is practically committing murder. Not only that, but by breaking the holy bond of marriage she is committing a sacrilege. However, the flea is finally killed, and the poet is forced to change tactics. He argues that killing the flea was easy, and you say it has not harmed us - yielding to me will be just as easy and painless. The poem borrows a lot of religious imagery, because it helps add 'Godly' authority to the poem. John Donne's 'The Flea' uses inappropriate arguments because Donne says that as the bloods have been mingled in the flea, the woman has already had sex with him (theoretically) then there should be no reason why they should not have sex again. Also, Donne uses inappropriate argument by referring to religion as a basis for his statements. He says that what they are about to do is not only supported by God, and to not do it would be against God's will. The two Shakespeare Sonnets are distinctively different. Sonnet 'XVIII' is distinct from sonnet 'CXXX'. I find that sonnet 'XVIII' is less anti-love because it is more for romantic love, 'Shall I compare thee to a Sommer's Day? Thou art more lovely and more temperate'. Sonnet XVIII is a brilliant and famous sonnet where Shakespeare compares his lover's eternal beauty to the transient beauty of nature. ...read more.

He says in line 13 that he loves the woman and that is rare or extraordinary. Which simply means that he cannot believe that he actually does like another woman that is not beautiful to every extent but she offers something more than just good looks, companionship. The picture of true unconditional love is best presented in William Shakespeare's "Sonnet 130." Though his lover's lips are not full, he yearns for them. Though her cheeks are not rosy, he feels her glow. Her hair is certainly not soft and her breath does not project sweet perfume, but he is still truly captivated. She cannot sing to save her life, yet he loves to hear her voice. When she walks you would not call her graceful but he still cherishes her clumsy strides. This is a poem written by a man that has learned to love with his heart and not his eyes. I think that all the poems/sonnets can to an extent be seen as being anti-love but, none are completely anti-love. To an extent, 'Sonnet XVIII' is not anti love as Shakespeare compares his lover's eternal beauty to the transient beauty of nature. But that does make it anti physical love. However, 'To His Coy Mistress' or 'The Flea' are more anti romantic love as the sole purpose of these poems is to 'woo' a lover into having sex. - 1 - ...read more.