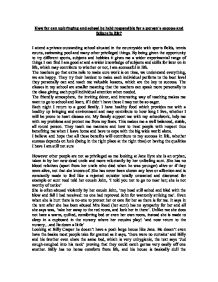 How far can upbringing and school be held responsible for a person's success and failure in life?

How far can upbringing and school be held responsible for a person's success and failure in life? I attend a private outstanding school situated in the countryside with sports fields, tennis courts, swimming pool and many other privileged things. By being given the opportunity to try different sports, subjects and hobbies it gives me a wider experimental range of things I can find I am good at and a wider knowledge of subjects and skills for later on in life, which may contribute to whether or not, I am successful in life. The teachers go that extra mile to make sure work is on time, we understand everything, we are happy. They try their hardest to make each individual perform to the best level they personally can and teach me valuable lessons, which are the key to success. The classes in my school are smaller meaning that the teachers can speak more personally to the class giving each pupil individual attention when needed. The friendly atmosphere, the inviting d�cor, and interesting way of teaching makes me want to go to school and learn, if I didn't have these I may not be so eager. Each night I return to a good family. I have healthy food which provides me with a healthy up bringing and environment and may contribute to how long I live, whether I will be prone to heart disease etc. ...read more.

is very unhygienic, the text says 'Jud cough-coughed into his neck' proving that they could catch germs very easily off one another. Billy has no home comforts from life, and his house is basically dull the atmosphere is described as 'gritty texture, the bedroom as 'gloomy' and the temperature 'cold' His single parent mother doesn't care about him or what he does, she doesn't even make sure he has food to eat, because when Billy looks in the cupboard there is only 'a packet of dried peas and half a bottle of vinegar', as for that there was no other food in the house, no wonder Billy is so small. His mum doesn't care about his education either as she asks him to go and buy her cigarettes even if it does make him late for school. And he even tells his mum he'll be late fro school if he doesn't go now as he says 'Gi'o'er now, mam, ill be late for school' and she just replies by saying 'you'll be more than late, unless you do as you're telled'. She doesn't really bother about what he's interested in because when Billy is telling her about Kestrels she uses a common excuse 'I say what time is it?' in order to leave to go and get 'blind drunk' and probably bring home another man, as she seems to bring one home nearly every night as in the morning Billy says 'who's that bloke?'. ...read more.

arm up his back' All these examples make me wonder how on earth is Billy to gain success when his family doesn't listen to him or pay any attention what so ever to him and if they do pay him attention then its bad attention of either bullying, swearing at him, abusing him or putting him down. He has never heard a positive word said to him in his life probably. No one encourages him and tells him he can do it and he is given no affection by his family or rewards in life. Hid family can't be bothered with him and he has to earn his own money at 14! He has a paper round which doesn't earn him much but without it he probably wouldn't have anything at all to eat. He steals in order to actually keep living as it says in the text about him stealing the orange cartons on from the milk man and the eggs and sweets he stole from the shop. Billy's mum doesn't provide Billy with the right materials for school either as she spends all her money on drinking with the men, in football Billy even admits to his football teacher that 'my mother wont buy me any' refereeing to his football kit, as she thinks it is a 'waste of money' obviously spending her money on getting drunk, she thinks is a better use of money than her sons physical education. ...read more.