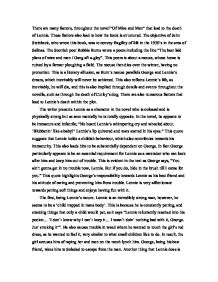 How far do you agree that the death of Lennie is inevitable?

There are many factors, throughout the novel "Of Mice and Men" that lead to the death of Lennie. These factors also lead to how the book is structured. The objective of John Steinbeck, who wrote this book, was to convey fragility of life in the 1930's in the area of Salinas. The Scottish poet Robbie Burns wrote a poem including the line "The best laid plans of mice and men / Gang aft a-gley". This poem is about a mouse, whose home is ruined by a farmer ploughing a field. The mouse then dies over the winter, having no protection. This is a literary allusion, as Burn's mouse parallels George and Lennie's dream, which inevitably will never be achieved. This also reflects Lennie's life, as inevitably, he will die, and this is also implied through details and events throughout the novella, such as through the death of Curley's dog. There are also numerous factors that lead to Lennie's death within the plot. The writer presents Lennie as a character in the novel who is colossal and is physically strong but as seen mentally he is totally opposite. In the novel, he appears to be immature and infantile; "He heard Lennie's whimpering cry and wheeled about. 'Blubberin' like a baby?' Lennie's lip quivered and tears started in his eyes." This quote suggests that Lennie holds a childish behaviour, which also contributes towards his immaturity. ...read more.

In context to Lennie's behaviour to other characters, he is presented as a very polite and soft person. He considers important enough to listen to and follow George and his instructions; "Of course, George, I can remember that. I am gonna hide in the brush till you come." This quote reveals Lennie's faith and dependence on George and tells us that he does not have the ability to keep him safe from trouble. Therefore his personal behaviour and characteristics contribute effectively towards the serious trouble, which Lennie will get in to later in the novel. The author tends to be keen while setting up Lennie and the ways in which he tries to make Lennie's death unavoidable. Repetition of Lennie doing bad things one after another and increasing trouble from time to time represents the serious trouble, which Lennie might get in to very soon. Lennie killing mice and a pup shows his own ability of killing a living organism; "You always kill 'em. Lennie said, 'They was so little.' I'd' pet'em, and pretty soon the bit my fingers and I pinched their heads a little and they were dead." The quote highlights Lennie's unawareness of his physical strength, which is the major reason for most of his own created troubles. Furthermore, Steinbeck tries to come across the following key point in the novel. ...read more.

During this tragic event, Steinbeck shows that Lennie panics and breaks Curley's wife's neck accidentally instead of using his brain to know why is she screaming. "'Don't you go yellin', he said, and shook her; and her body flopped like a fish, for Lennie had broken her neck." This quote highlights how Lennie's inability of using his mind and how using his physical strength, which he is not aware of, leads him to the serious trouble, which the author tries to present and emphasise in the novel. In conclusion, the main factor that led to Lennie's was in fact Steinbeck's fundamental message. Also, intolerance, and misunderstanding in society did not help Lennie, as he has been given no place, and people don't know how to treat Lennie, as he is so misunderstood. The structure also leads to Lennie's death. We see his death as inevitable, due to the main title of the novella, and also how it is organised. Lennie's death was not unexpected, especially when we have read the last chapter, with Lennie's visions. The giant rabbit tells us that Lennie has done wrong, and that he will be punished for it, by not having George and his dream ranch, and him tending the rabbits. Lennie's innocence and his inability to use his mind, secures his inevitable destruction. These factors all point, very obviously throughout the novel; hence Lennie's death was inevitable. ...read more.