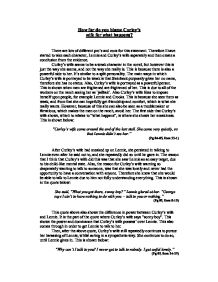 How far do you blame Curley&amp;#146;s wife for what happens?

How far do you blame Curley's wife for what happens? There are lots of different pro's and cons for this statement. Therefore I have started to take each character, Lennie and Curley's wife separately and then create a conclusion from the evidence. Curley's wife seems to be a weak character in the novel, but however this is just the way she seems, and not the way she really is. This is because there is also a powerful side to her. It's similar to a split personality. The main ways in which Curley's wife is portrayed to be weak is that Steinbeck purposely gives her no name, therefore she has no status. Also, Curley's wife is portrayed as a powerful person. This is shown when men are frightened are frightened of her. This is due to all of the workers on the ranch seeing her as `jailbait`. Also Curley's wife likes to impose herself upon people, for example Lennie and Crooks. This is because she sees them as weak, and from that she can hopefully get friendship and comfort, which is what she really wants. ...read more.

She continues to do so, until Lennie gives in. This is shown below: "Why can't I talk to you? I never get to talk to nobody. I get awful lonely." (Pg 85, lines 24-25) "Lennie said, "Well, I ain't supposed to talk to you or nothing." "I get lonely" she said." (Pg 85, lines 26-27) This then results in Lennie talking to Curley's wife about what had happened to the puppy, even though it was against his will, as he was still reluctant about going against the wishes of George. This is shown below: "He was so little, said Lennie. I was jus' playin with him...an' he made like he's gonna bite me...an' I made like I was gonna smack him...an',,,an' I done it. An' then he was dead." (Pg86, lines 7-10) Here is Lennie talking to Curley's wife, about what had happened to the puppy, but he shows concerns over what George, would, think of them, and also most probably about the rabbits. The conversation then becomes closer, and Curley's wife starts to flirt, with Lennie, this confuses Lennie, as is easily done. ...read more.