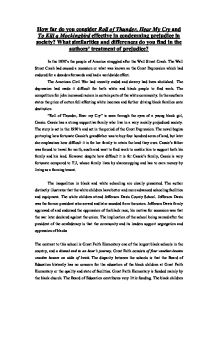 How far do you consider &quot;Roll of Thunder, Hear My Cry&quot; and &quot;To Kill a Mockingbird&quot; effective in condemning prejudice in society

How far do you consider Roll of Thunder, Hear My Cry and To Kill a Mockingbird effective in condemning prejudice in society? What similarities and differences do you find in the authors' treatment of prejudice? In the 1930's the people of America struggled after the Wall Street Crash. The Wall Street Crash had caused a recession or what was known as the Great Depression which had endured for a decade afterwards and had a worldwide effect. The American Civil War had recently ended and slavery had been abolished. The depression had made it difficult for both white and black people to find work. The competition for jobs increased racism in certain parts of the white community. In the southern states the price of cotton fell affecting white incomes and further driving black families unto destitution "Roll of Thunder, Hear my Cry" is seen through the eyes of a young black girl, Cassie. Cassie has a strong supportive family who live in a very racially prejudiced society. The story is set in the 1930's and set in the period of the Great Depression. The novel begins portraying how fortunate Cassie's grandfather was to buy four hundred acres of land, but later she emphasizes how difficult it is for her family to retain the land they own. Cassie's father was forced to travel far north, south and west to find work to enable him to support both his family and his land. ...read more.

Cassie becomes aware of the concept that those like Mr. Simms, condescending, arrogant white people, will never treat Cassie as equal but only less. T.J is portrayed initially as a mischievous and obnoxious boy, always causing trouble. As the story unravels it becomes more evident why T.J is so infuriating. T.J is really a victim of circumstance. If his upbringing had been more caring and supportive he would have been a different person. T.J's parents are unsupportive and uncaring; they have been broken by the racist society they live in and so T.J is affected also in a vicious circle. T.J doesn't spend much time with his family but at the Wallaces' store. Cassie's family is strong and supportive providing much care for her and her brothers. However T.J does not have the same luxury. He tries anxiously to fit in and is friendly with Cassie and Stacey because he envies how lucky they are. T.J is fundamentally insecure. He has very little self confidence and self esteem because deep he has been made to feel inferior and substandard, but in spite of this he chooses not to accept the fact that he is second class. T.J constantly stays at the Wallace's' store. The Wallace's had burnt down the Berrys'/ house and killed the Berrys. The Wallaces are prejudiced and uneducated rednecks. T.J befriends the Simms brothers R.W and Melvin. Shortly after befriending him they both goad T.J into stealing a gun. ...read more.

Although Tom Robinson is found guilty, Atticus had done something which was truly difficult. He challenged the arrogant views of part of the jury, however not the whole of the jury. Despite Tom Robinson being found guilty, an appeal would have still been available. This hope is eradicated when Tom Robinson was shot 17 times after attempting to climb the prison wall. It is very excessive to shoot him 17 times, and blatantly the guards shot to kill rather than prevent him from escaping. During the trial Bob Ewell was humiliated. Bob Ewell chose to deal with this humiliation by pursuing Jem and Scout, who are saved by Boo Radley. Boo Radley is repaid by not being arrested, however considering that Boo Radley was able to save Scout and Jem in time clearly means he must have acted as a guardian angel. He had saved the children because they were in trouble. Harper Lee uses both these incidents to condemn prejudice, showing that Tom Robinson and Boo Radley were both misjudged To Kill a Mockingbird and Roll of Thunder, Hear my Cry are similar in that they both leave the reader aware of the bigotry members if the public have, and despite the difference in race between Cassie and Scout, they both experience racism, and realise of how unjust the world is. Cassie experiences racism at first hand and Scout experiences racism second hand however they are both raised to deal with it, to be equally fair. Both stories depict how bad racism was in the 1930's and encourage the reader to condemn prejudice. ...read more.