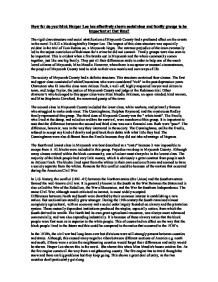 How far do you think Harper Lee has effectively shown social class and family groups to be important at that time?

How far do you think Harper Lee has effectively shown social class and family groups to be important at that time? The rigid class structure and social stratification of Maycomb County had a profound effect on the events in the novel To Kill a Mockingbird by Harper Lee. The impact of this class structure was especially evident in the trial of Tom Robins on, a Maycomb Negro. The extreme prejudice of the town eventually led to the unjust conviction of Robinson for a crime he did not commit. Family groups were also seen to be important. This is evident when a fire breaks out in Maycomb and the whole community comes together, just like one big family. They put all their differences aside in order to help one of the much loved citizens of Maycomb, Miss Maudie. However, when there is no uproar or unusual circumstances, the people of Maycomb County tend to stick to their own morals and own ways of life. The society of Maycomb County had a definite structure. This structure contained four classes. The first and upper class consisted of white/Caucasians who were considered "rich" in the post-depression years. ...read more.

Reasons for this conflict could be because of the matters that occurred during the American Civil War. In U.S. history, the conflict (1861-65) between the Northern states (the Union) and the Southern states formed the well-known civil war. It is generally known in the South as the War Between the States and is also called the War of the Rebellion, the War of Secession, and the War for Southern Independence. The name Civil War, although much criticised as inexact, is most widely accepted. Differences between North and South were dwarfed by their common interest in establishing a new nation. But sectionalism steadily grew stronger. During the 19th century the South remained almost completely agricultural, with an economy and a social order largely founded on slavery and the plantation system. These mutually dependent institutions produced the staples, especially cotton, from which the South derived its wealth. The North had its own great agricultural resources, was always more advanced commercially, and was also expanding industrially. It is because of these slavery antics that the black people were first seen as in superior to the white people. ...read more.

The Wall Street crash initially caused the Depression in 1929. People at all levels of society were affected. Those at the highest levels of the financial spectrum were affected as they lost money on investments and future plans. This in affect, filtered down throughout society, as the employers had to decrease wages and lose many staff. This unity that existed in America is shown within Maycomb. For example: Atticus is affected as a lawyer as his clients cannot afford to pay him therefore, causing him to have financial problems. The Depression is also shown through the Cunningham family within the book as, their farm struggles. Atticus and the Cunningham's show that unity takes place as, The Cunningham's cannot afford to pay him for some work he has done. So they pay him back in ways they can. For example: Mr Cunningham paid Atticus instalments, he gave him a sack of hickory nuts etc. When Scout asked her father why he paid him in this way Atticus simply said; " Because that's the only way he can pay me. He has no money." This shows that Atticus understands and does not penalise them because, they have no other way to pay him. This again shows unity as he could have refused to work for him. ...read more.