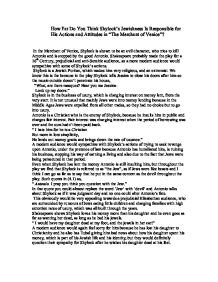 How Far Do You Think Shylock's Jewishness Is Responsible for His Actions and Attitudes in &quot;The Merchant of Venice&quot;?

How Far Do You Think Shylock's Jewishness Is Responsible for His Actions and Attitudes in "The Merchant of Venice"? In the Merchant of Venice, Shylock is shown to be an evil character, who tries to kill Antonio and is stopped by the good Antonio. Shakespeare probably made the play for a 16th Century, prejudicial and anti-Semitic audience, so a more modern audience would sympathize with some of Shylock's actions. Shylock is a Jewish Puritan, which makes him very religious, and an extremist. We know this is the because in the play Shylock tells Jessica to close his doors after him so the music outside doesn't penetrate his house, "What, are there masques? Hear you me Jessica- Lock up my doors." Shylock is in the business of usury, which is charging interest on money lent, from the very start. It is not unusual that mainly Jews were into money lending because in the Middle Ages Jews were expelled from all other trades, so they had no choice but to go into usury. Antonio is a Christian who is the enemy of Shylock, because he insults him in public and charges fair interest. Fair interest was charging interest when the period of borrowing was over and the sum hadn't been paid back. ...read more.

Some could argue against this because when the Jews came to Europe they were forced into money lending, so it became a part of their Jewish life and in a way it became a part of their Jewishness. In the play Shylock keeps referring back to the Torah (Jewish Bible) to prove that usury was right whenever Antonio undermines it (1:3). " Directly interest- mark what Jacob did." Jews chose to isolate themselves from the rest of the community because they thought they were the chosen people of God. Shylock also isolates himself from society in the play. " But I will not eat with you, drink with you, nor pray with you..." (1:3) An audience would not sympathize with Shylock because he chooses to be isolated from society, which gives the impression that he is slightly superior as a Jew to other people, which attracts insults from other people. This shows that Shylock's Jewishness is responsible for his actions and attitudes towards Antonia and other Christians in the play. At court Shylock is being insulted even more because he wants to kill Antonio, which makes him even more determined and creates sympathy from a modern audience. Antonio also get back at Shylock, but telling his friends to leave the Jew alone and keeps talking about how no one can save him from the "Jew" because he trying to die like a martyr. ...read more.

Then Gratiano starts to mock Shylock for praising the judge and calling him " a learned judge" and this keeps the sympathy for Shylock. Throughout the play the sympathy for Shylock has been kept by the modern audience because of the circumstances he was put in before he wanted revenge. Although several times in the play Shylock says that the real reason he wants to kill Antonia is because he brings down the rate of usury. So the question we must ask ourselves is whether it is Shylock's greed for money or his religious views that are behind his actions and attitudes in the play? Shylock actions were also influenced by Tubal (3:1) who kept giving him bad news, about his daughter spending his money and then "good" news about Antonio's bad luck. " Fourscore ducats at a sitting! Fourscore ducats!" " Tubal. There came divers of Antonio's creditors in my company to Venice..." It seems that in this scene Tubal saw his chance of winding Shylock up enough that he became bloodthirsty. You have to include such factors as Tubal's influence, Shylock's greed, his religious views and the traditional Jewish way of life before coming to a definite conclusion and I believe it is not really Shylock's Jewishness which, cause him to take the attitudes and actions in the Merchant of Venice. ...read more.