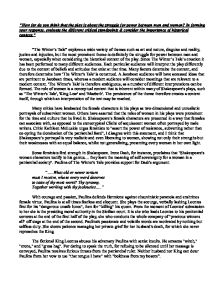 &quot;How far do you think that the play is about the struggle for power between men and women? In forming your response, evaluate the different critical standpoints &amp; consider the importance of historical context.&quot;

"How far do you think that the play is about the struggle for power between men and women? In forming your response, evaluate the different critical standpoints & consider the importance of historical context." "The Winter's Tale" explores a wide variety of themes such as art and nature, disguise and reality, justice and injustice, but the most prominent theme is definitely the struggle for power between men and women, especially when considering the historical context of the play. Since The Winter's Tale's creation it has been performed to many different audiences. Each particular audience will interpret the play differently due to the context of beliefs and attitudes that exist at that time. Many factors determine the context, and therefore determine how 'The Winter's Tale' is construed. A Jacobean audience will have accessed ideas that are pertinent to Jacobean times, whereas a modern audience will consider meanings that are relevant to a modern context. 'The Winter's Tale' is therefore ambiguous, as a number of different interpretations can be formed. The role of women is a conceptual context that is inherent within many of Shakespeare's plays, such as "The Winter's Tale', 'King Lear' and 'Macbeth'. The persistence of the theme therefore creates a context itself, through which an interpretation of the text may be reached. ...read more.

Looking at the play from a Feminist viewpoint Leontes' behaviour and language are reflective of the repressive structure of society, where sexual degradation is a tool for women's repression. Shakespeare uses this language to portray Leontes publicly degrading Hermione, however her reciprocation is done honourably: "Should a villain say so. The most replenished villain in the world, He were as much more villain. You, my Lord, Do but mistake" She insists that he must have made a 'mistake' as only 'the most replenished villain' would say such things. The use of the noun "villain" distances her attack from being personal. Hermione also uses the subjective 'if', showing how she skilfully manipulates her subject. She behaves in a way, which is paradoxical to Leontes' suspicions. Shakespeare does this to intensify Leontes' paranoia and Hermione's sense of justice. Shakespeare uses this contrast as a device to ensure that we can see the different powers that Leontes and Hermione posses. Leontes is superficial and brash whereas Hermione is confident and thoughtful. Shakespeare is showing us that Hermione knows how to use her power in an ethical way, in comparison to Leontes who uses-his rashly with selfish intentions. She is representative of the eloquent stoicism we associate with heroines of Greek tragedy. ...read more.

Throughout The Winter's Tale' the female characters demonstrate an ability to subtly demonstrate authority over the male characters, thus avoiding any misunderstandings and allowing the men to maintain their dignity. Shakespeare uses these subtleties to portray the dangers of absolute power. Despite the overwhelming power of the kings, the only two to triumph in the conflict are Hermione and Perdita. They both show themselves to be above the corrupt actions of the kings whilst maintaining the highest level's of dignity throughout. While the struggle for power consumes Leontes and Polixenes, it is the struggle for equality and the right to speak that the women pursue. At the end of the play, despite the hardship suffered by all characters it appears that this struggle for equality is not over. Paulina is speaking and Leontes interrupts: "0 peace, Paulina" This suggests that despite all his protestations of reform he has still not grasped the concept of equality and freedom of speech, emphasizing the ongoing "....struggle for power between men and women?" Daniel Maddock 2000 Words Approx. Reference Material. William Shakespeare's "The Winter's Tale" J.H.Pafford's Introduction to The Winter's Tale Penguin Critical studies - Shakespeare's sources for The Winter's Tale Secondary sources - "The Winter's Tale" The Early Reviews. ...read more.