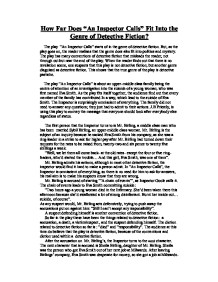 How Far Does &quot;An Inspector Calls&quot; Fit Into the Genre of Detective Fiction?

How Far Does "An Inspector Calls" Fit Into the Genre of Detective Fiction? The play "An Inspector Calls" starts of in the genre of detective fiction. But, as the play goes on, the reader realises that the genre does also fit into politics and mystery. The play has many conventions of detective fiction that misleads the reader, not through out but near the end of the play. When the reader finds out that there is no revelation scene, one suspects that this play is not detective fiction, but another genre disguised as detective fiction. This shows that the true genre of the play is detective pastiche. The play "An Inspector Calls" is about an upper-middle class family being the centre of attention of an investigation into the suicide of a young woman, who was first named Eva Smith. As the play fits itself together, the audience find out that every member of the family has contributed In a way, which lead to the suicide of Eva Smith. The Inspector is surprisingly omniscient of everything. The family did not need to answer any questions; they just had to admit to their actions. J.B Priestly, is using this play to convey the message that everyone should look after everybody else regardless of status. The first person that the Inspector turns to is Mr. Birling, a middle class man who has been married Sybil Birling, an upper-middle class woman. Mr. Birling is the subject of an inquiry because he sacked Eva Smith from his company, as she was a ring-leader in a strike to ask for higher pay after Mr. ...read more.

Eric confirms that Eva was telling the truth, that he had made her pregnant on a drunken night, that he had given her stolen money from his father's office, and that she had refused the money: "She wouldn't take any more". Eva didn't want to marry Eric because she felt that he didn't love her. Eric accepts his responsibility but Mrs. Birling does not, and she only cares about what she said about the father because she finds out it was her own son. Throughout the interrogations, the Inspector is omniscient of the events but asks questions, trying to teach the characters a lesson. He is annoyed when the characters act snobby. All the interrogations and the conventions of detective fiction they contain persuade the audience that "An Inspector Calls" is detective fiction. However, after the interrogation with Eric, the audience suddenly realise that this play is not in the genre of detective fiction. The Inspector makes a moral message and leaves without making an arrest: "Good night". In normal detective fiction, an arrest is made. The audience realise that this play is not detective fiction, and along with the characters, doubt if Inspector Goole is a real inspector, such as Sheila: "but was he really a police inspector?" and Mr. Birling: "By Jingo! A fake!" Gerald says that when he went for his walk, he asked a police sergeant if there was an Inspector Goole, and after Gerald described the Inspector, the sergeant said there was no such person. Mr. Birling phones the police and asks if there is an Inspector Goole in the staff, and describes him. ...read more.

This shows that the interrogations will start again. The characters are shocked- they had just assured themselves that it was all a hoax and it was confirmed when they phoned the infirmary to ask if there had been a suicide just before and there had been none. The play has a cyclical structure because not all the characters have learnt their lessons, only Sheila and Eric have. In conclusion, "An Inspector Calls" is not detective fiction. The title, death, interrogations and diction persuade the audience that the play is detective fiction, but as soon as the inspector leaves without making an arrest but with a message, the audience suddenly realise that "An Inspector Calls" is not detective fiction. It is in fact a moral play. This is because of the message the Inspector gives, that everyone should look after one another. If "An Inspector Calls" was in detective fiction, the Birlings and Gerald would not be the criminals, because they have not committed any crimes, and even though Eric stole money from his dad, that would not put him in jail. The criminal would be Eva, for committing suicide. However, morally, Priestly is trying to make the audience believe that the Birlings and Gerald are the criminals, because they drove Eva to suicide and apart from Gerald, didn't help her. The only reason J.B Priestly portrayed "An Inspector Calls" as detective fiction was because more people like detective fiction and would watch it. J.B Priestly would have a wider audience and teach all of them the message: "We are members of one body. We are responsible for each other. And I tell you that the time will soon come when, if men will not learn that lesson, then they will be taught it in fire and blood and anguish". ...read more.