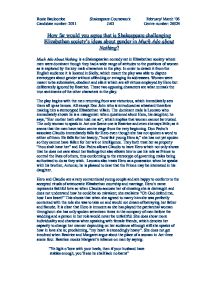 How far would you agree that is Shakespeare challenging Elizabethan society's ideas about gender in Much Ado about Nothing? Much Ado About Nothing is a Shakespearian comedy set in Elizabethan society where men were dominant though they had a wide range of attitudes to the positions of women as is explored by the key male characters in the play. In order to detach it from the English audience it is located in Sicily, which meant the play was able to dispute stereotypes about gender without offending or enraging its addressees. Women were meant to be submissive, obedient and silent which are all virtues employed by Hero but deliberately ignored by Beatrice. These two opposing characters are what unmask the true sentiments of the other characters in the play. The play begins with the men returning from war victorious, which immediately sets them all up as heroes. All except Don John who is introduced as a bastard therefore making him a stereotyped Elizabethan villain. The dominant male is Leonato who immediately shows he is a misogynist: when questioned about Hero, his daughter; he says, "Her mother hath often told me so", which implies that women cannot be trusted. The only woman to speak in Act one Scene one is Beatrice and even she says little; as it seems that the men have taken centre stage from the very beginning. ...read more.

At their wedding he shames her in front of many friends and family and absolutely refuses to believe her pleas of innocence. This ultimate belief in Don John by both Claudio and Don Pedro is evidence of the male camaraderie throughout the play and even though Don John is a Bastard and a proven knave they trust him above and beyond Hero and the other women proving how very little faith or respect they have for women and their opinions: Claudio pronounces "Oh, Hero, what a hero though hast been ... on my eyelids shall conjecture hang". Although it may seem that he has little soul he does show a more caring side when it appears his slander has killed Hero. He agrees to do anything for her father to repent his sins though this may just be to keep him on good terms with Leonato. What a modern audience would find especially shocking is the way in which Hero readily takes back Claudio at the end of the play. Her jejune attitude is typical of the time and comes from the fact that Leonato, her father, is quick to forgive Don Pedro and Claudio so Hero is willing to do her father's bidding and may actually love Claudio enough to forgive him. The relationship between Beatrice and Benedick is a focal point of the play even though they do not actually unite until the end. ...read more.

A modern audience could not comprehend the thought that such an outgoing, feisty woman could be so easily denounced but an Elizabethan audience would have been contented with this as a clich�d resolution. Claudio and Benedick both represent different types of male stereotypes while Hero plays the classic female subservient character. Beatrice is the only character in the Much Ado About Nothing who dares to be diverse by speaking out about her feelings and opinions of men and humanity. It is thought that she may have been loosely based on Queen Elizabeth, as she was a highly intelligent woman of the time.2 When Beatrice is 'silenced' at the end of the play, it is Shakespeare's way of making sure that everyone has fitted into his or her allocated role. The women acquiescent and the men preponderant, Don John the villain is fled yet brought back by the armies and peace seems to have been restored to Messina, as it was in the beginning. Although Beatrice and Benedick try to fight their positions throughout they eventually kowtow to the Elizabethan society's stereotypes and fit in with all the other characters; who have remained patriarchal all the way through. 1 KS4 Study guide to William Shakespeare's Much Ado About Nothing [Sherman Hawkins] 2 www.sparknotes.com ?? ?? ?? ?? Rosie Baulcombe Shakespeare Coursework February/ March '06 Candidate number: 2011 JAD Centre number: 26324 ...read more.