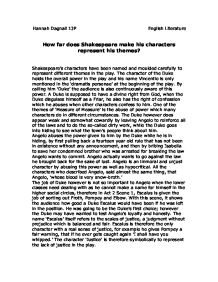 How far does Shakespeare make his characters represent his themes?

Hannah Dagnall 13P English Literature How far does Shakespeare make his characters represent his themes? Shakespeare's characters have been named and moulded carefully to represent different themes in the play. The character of the Duke holds the overall power in the play and his name Vincentio is only mentioned in the 'dramatis personae' at the beginning of the play. By calling him 'Duke' the audience is also continuously aware of this power. A Duke is supposed to have a divine right from God, when the Duke disguises himself as a Friar, he also has the right of confession which he abuses when other characters confess to him. One of the themes of 'Measure of Measure' is the abuse of power which many characters do in different circumstances. The Duke however does appear weak and somewhat cowardly by leaving Angelo to reinforce all of the laws and to do the so-called dirty work, while the Duke goes into hiding to see what the town's people think about him. ...read more.

The character 'Justice' is therefore symbolically to represent the lack of justice in the play. Claudio is a victim of the law being pulled back and therefore looks on society as unjust and corrupt with those laws. He sees sex as a natural thing, however 'when we drink, we die.' That 'liberty' turns to 'restraint' as he feels that too much freedom has been given to just take it away again without warning. Claudio loves Juliet and thinks he has been condemned wrongly, that he is a victim of injustice. Angelo however, even though his name comes from the word 'angel' does not show mercy; 'Tis one thing to be tempted...another thing to fall.' However when Angelo falls for Isabella, it is not love he feels, but lust and even though he was in a confused state, in Act 2 Scene 4 he questions himself and his feelings about it however he was tempted and he fell. ...read more.

Isabella shows a sense of justice and injustice also, by allowing her brother Claudio to be killed instead of sacrificing her virginity is an injustice; however justice pulls through when Marianne takes her place. Isabella constantly also seeks justice and begs for her brother's life. Lucio is a character that has gone out of his way to help Claudio, however in Act 1 Scene 4 when he tells Isabella Claudio's fate, he shows no respect for religion or the nunnery when he says: 'Hail virgin if you be...' His sense of justice for Claudio however is very strong and he encourages Isabella to continue to beg for her brother. The audience likes Lucio for standing by Claudio as well as his easy and casual attitude to different issues that arise. He knew that the Duke has lied about where he was, which is closer than any of the other character's got to the truth. The characters therefore represented and acted on different circumstances in the play which resulted in the introduction of different themes in the play, such as justice, morality, power and corruption. ...read more.