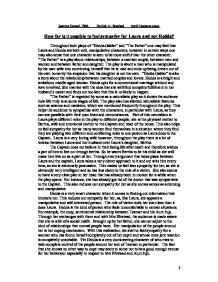 How far is it possible to feel sympathy for Laura and not Hedda?

Jasmine Seippel, IB06, English A1 Standard world literature essay How far is it possible to feel sympathy for Laura and not Hedda? Throughout both plays of "Hedda Gabler" and "The Father" one may feel that Laura and Hedda are both evil, manipulative characters, however in certain ways one may also sense that one character is seen to be more sinful than the other character. "The Father" is a play about relationships, between a married couple, between men and women and between father and daughter. The play is about a man who is manipulated by his own wife into convincing himself that he is mad and ends up being driven out of his own home by the suspicion that his daughter is not his own. "Hedda Gabler" is also a story about the relationship between married couples and lovers. Hedda is a bright and ambitious middle-aged woman. Hedda opts for a conventional marriage without any love involved. She marries with the idea that she will find complete fulfilment in her husband's career and finds out too late that this is unlikely to happen. "The Father" is regarded by some as a naturalistic play as it shows the audience how life truly is at some stages of life. ...read more.

Jasmine Seippel, IB06, English A1 Standard world literature essay In many ways, one may feel less sympathy for Laura than is expected as while reading the play you feel a great deal of anger at her because she is such an evil character in the way that she treats her fellow characters in the play. She does this by misleading them; she misleads the doctor and convinces him that the captain is completely insane. The doctor feels more reason to believe Laura as at the end of act two she provokes the captain to become so furious as to throw a lamp at her. This is extremely shocking coming from the captain however; it is seen as an act of a mad man. It is extremely cruel how she uses this act against the captain as his actions where due to her comment on how he will be under restraint the following morning and Laura will then have complete control of the house. The act of her convincing the doctor that the captain is mad is an extremely cruel plot, which she succeeds in. By seeing Laura treat her husband in this way, someone she loved in the past shows us that should not have that much sympathy for her. ...read more.

Jasmine Seippel, IB06, English A1 Standard world literature essay Both of these characters are very similar in certain ways, which allows us to react to them equally. Laura shows us how she drives the captain insane but possibly realises he needs to be sent to an institution anyway. The way Laura reacts to his scientific brain is extreme and offensive to him. When looking at how Laura, being a wife, reacts to the captain I feel as though she has reasons to react this way but there better ways to do it, and not by making him believe he is not the father of his daughter. I feel very sorry for the captain to have to put up with her. With Hedda on the other hand, I feel as though she deserves more sympathy as, to me it seems as though her reactions to everyone are due to her confusion and jealousy. However, Hedda has no real excuse to react the way she does and deserves very little sympathy in this respect but still some. It is not very easy to feel sympathy for either of the two characters in the plays as they have different reasons to react the way they do, still they do not respect the surrounding characters as much as they should. ?? ?? ?? ?? 1 ...read more.