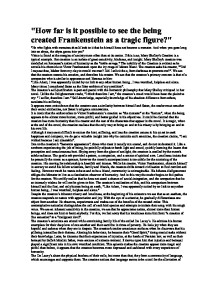 &quot;How far is it possible to see the being created Frankenstein as a tragic figure?&quot;

"How far is it possible to see the being created Frankenstein as a tragic figure?" "He who fights with monsters should look to it that he himself does not become a monster. And when you gaze long into an abyss, the abyss gazes into you" Virtue is found at the margins of society more often than at its centre. If this is so, Mary Shelley's Creation is a typical example. Her creature is an isolate of great sensitivity, kindness, and insight. Mary Shelley's creature was modelled on Rousseau's notion of humanity as the "noble savage." The nobility of the Creature is evident as he unveils his chronicle to Victor Frankenstein upon the icy crags of Mount Blanc. The creature asks his creator, ""Did I request thee, Maker from my clay to mould me man? Did I solicit thee, from darkness to promote me?". We see that the creature resents his creation, and therefore his creator. We see that the creature�s primary concern is that of a companion who is similar in appearance and likeness to him: "Like Adam, I was apparently united by no link to any other human being...I was wretched, helpless and alone. Many times I considered Satan as the fitter emblem of my condition". The creature�s self-justification is part and parcel with the Romantic philosophy that Mary Shelley critiqued in her novel. ...read more.

She has to learn French in order to fully participate in family life. From behind a chink in the rough wall, the creature takes part in a hidden tutorial, learning his lessons more eagerly than Safie. Volney's history, Ruins of Empires, narrated the plight of the exploited "savage" in North America. Hearing of their misery moves the creature to tears. He compares his rejection by humans with the racial bigotry of the colonisers. Contrasting this history with the hospitality he observes in the cottage gives him hope. The De Laceys never turn a stranger from their door. The creature reasons that the family might welcome him. Goethe's Sorrows of Werther introduces the Monster to the sensitivity and agonies of romance. He weeps again, feeling kinship with the unrequited Werther. Felix and Safie's affection for one another increases the intensity of the creature�s loneliness. He becomes aware of his own need for never-to-be granted sexual satisfaction. Self-destruction proposes a decisive way out of pain and rejection. Living, however, seems to offer more to the creature since Werther's wretched life displayed a depth of devotion that went beyond mere escape. Sorrow might ennoble the creature, fitting him for respect if not love. This complex thought and reason on behalf of the creature intensifies the tragedy of his destiny. ...read more.

Within the pain and suffering of his own perspective, the creature's patience, goodwill and sensitivity seem to outstrip and justify his violence. The human species and his egocentric creator treated him horribly. The power of his rhetoric resounds in the convincing alliteration yet there is something wrong with his logic. Being in a state of misery does not necessitate miserable behaviour. The criteria for criticism of the creature is not aesthetic or moral, but behavioural. The creature is one of the most heinous types of being - a sensitive and intelligent killer. This judgement has nothing to do with the physical or metaphysical gap between the creature and humanity; there are many of his ilk in our species. It is a criminal platform, which declares that upbringing, social pressure, and heinous abuse lead to evil behaviour. Murder, theft and rape, according to this view, are inescapably the result of extraneous factors, not personal choice. Despite the creature�s appalling crimes, we recognise his justification for his actions. We see that his inner pity and loneliness drive him to the edge. Frankenstein appears to be the antipathy of the creature�s existence and its actions. The creature is not to blame - it is the creator. For this reason, we feel more pathos, compassion, and pity for the creature - not its creator. "In no beast so fierce, does not now some touch of pity" ...read more.