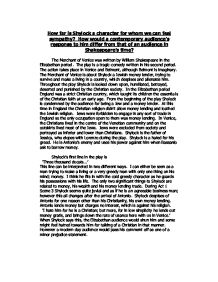 How far is Shylock a character for whom we can feel sympathy? How would a contemporary audience&amp;#146;s response to him differ from that of an audience in Shakespeare&amp;#146;s time?

How far is Shylock a character for whom we can feel sympathy? How would a contemporary audience's response to him differ from that of an audience in Shakespeare's time? The Merchant of Venice was written by William Shakespeare in the Elizabethan period. The play is a tragic-comedy written in his second period. The action takes place in Venice and Belmont, although Belmont is imaginary. The Merchant of Venice is about Shylock a Jewish money lender, trying to survive and make a living in a country, which despises and alienates him. Throughout the play Shylock is looked down upon, humiliated, betrayed, deserted and punished by the Christian society. In the Elizabethan period England was a strict Christian country, which taught its children the essentials of the Christian faith at an early age. From the beginning of the play Shylock is condemned by the audience for being a Jew and a money lender. At this time in England the Christian religion didn't allow money lending and loathed the Jewish religion. ...read more.

Shylock despises of Antonio for one reason other than his Christianity, his own money lending. Antonio lends money but charges no interest, which is against his religion. 'I hate him for he is a Christian; but more, for in low simplicity he lends out money gratis, and brings down the rate of usance here with us in Venice.' When Shylock says this, the Elizabethan audience would shun him and some might feel hatred towards him for talking of a Christian in that manner. However a modern day audience would pass his comment off as one of a minor prejudice statement. Also the people in Venice mock and laugh at Shylock when his daughter eloped with his money to marry a Christian. Salarino and Salanio make fun of him by saying ^..... the dog Jew did utter in the streets: ^My daughter! O my ducats! O my daughter! Fled with a Christian! O my Christian ducats! Justice! the law! my ducats, and my daughter! ...read more.

^..... other men have ill luck too: Antonio, as I heard in Genoa, .....hath an argosy cast away, coming from Tripolis^ (III.1) said Tubal, a friend of Shylock^s informing him about Antonio^s misfortune. Shylock rejoices saying ^I thank God, I thank God..... I thank thee good Tubal: good news, good news! ha, ha! ..... I^m am very glad of it: I^ll plague him; I^ll torture him: I^m glad of it^ (III.1) This ! shows that he was a horrible man. Later when he was offered the money, he refuses saying that he would rather have Antonio^s flesh than money ^When I was with him I have heard him swear to Tubal and to Chus, his countrymen, that he would rather have Antonio^s flesh than twenty times the value of the sum that he did owe him^ (III.2) says Jessica, Shylock^s daughter informing Bassanio and Portia how much of a cruel man her father really is. These unkind attitudes of Venitians have originated from Venice being a commercial city of trade and business. People are untrustworthy and cunning. People who live here have to be aware of their fellow citizens, thus they have developed a untrusting, unkind attitude towards others. ...read more.