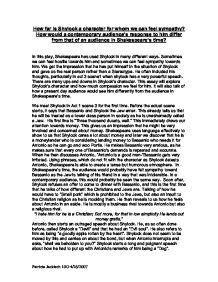 How far is Shylock a character for whom we can feel sympathy? How would a contemporary audience's response to him differ from that of an audience in Shakespeare's time?

How far is Shylock a character for whom we can feel sympathy? How would a contemporary audience's response to him differ from that of an audience in Shakespeare's time? In this play, Shakespeare has used Shylock in many different ways. Sometimes we can feel hostile towards him and sometimes we can feel sympathy towards him. We get the impression that he has put himself in the situation of Shylock and gave us the real person rather than a Stereotype. He often included his thoughts, particularly in act 3 scene1 when shylock has a very powerful speech. There are many ups and downs in Shylock's character. This essay will explore Shylock's character and how much compassion we feel for him. It will also talk of how a present day audience would see him differently from the audience in Shakespeare's time. We meet Shylock in Act 1 scene 3 for the first time. Before the actual scene starts, it says that Bassanio and Shylock the Jew enter. This already tells us that he will be treated as a lower class person in society as he is unashamedly called a Jew. His first line is "Three thousand ducats, well." This immediately draws our attention towards money. ...read more.

He cares about her, as he wants to make sure she is secure while he goes out to eat with a Christian to prevent spending his own money. After his daughter has gone, he does not seem to care for her at all. The only thing he is worrying about is the money and Jewelry that she took. He says "I would my daughter were dead at my foot, and the jewels in her ear". "Ill luck, Ill luck" is a phrase he uses to explain his grief for his lost jewels and money. "Thief" is the word that Shylock uses to describe his daughter after leaving him with the money. In this scene there is little sympathy for Shylock as he treats his own daughter with little value and lack of love. In today's audience, they would feel no sympathy as everyone should be accepted equally, but all he cares for is his money instead of his own relatives. In Shakespeare's time, they would most likely start to detest Shylock even more then they did before. They would feel sympathy for his poor daughter who is treated immorally and roughly by her own father who she seemed to have quite a close relationship to. ...read more.

We feel that he has been treated dishonestly and unjustly, but he has not treated others with respect either. His daughter said that it was "Hell" living in her father's house. This shows us that shylock was not a very affectionate person. He accuses people of calling him "Dog", but then expects it to be all right to kill a Christian. This is not how a Jew should behave, especially when they are very strong believers. Others Jews have also disobeyed him as killing is against their religion. After the court scene, shylock does not reappear. This is most likely because the play is a romantic comedy, and having a scene with shylock at the end would ruin the romantic and humorous atmosphere. The audience in today's times would respond very differently to an audience in Shakespeare's times. This is because many people were against Jews and so could not connect with Shylocks character. Today we are able to understand his personality and find out the actual feelings of Shylocks nature. We are able to interpret his feelings and can relate to him better as we are a society that has many different cultures and races mixed in it. We know that everybody has their own religion and we accept that they have their own freedoms and rights. ?? ?? ?? ?? Patricia Jackisch 10O 4/26/2007 ...read more.