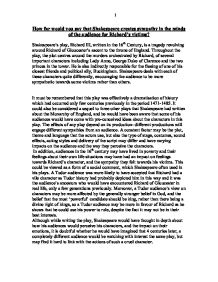 How far would you say Shakespeare creates sympathy in the minds of the audience for Richard's victims?

How far would you say that Shakespeare creates sympathy in the minds of the audience for Richard's victims? Shakespeare's play, Richard III, written in the 16th Century, is a tragedy revolving around Richard of Gloucester's ascent to the throne of England. Throughout the play, the plot centres around the murders orchestrated by Richard, of several important characters including Lady Anne, George Duke of Clarence and the two princes in the tower. He is also indirectly responsible for the fleeing of one of his closest friends and political ally, Buckingham. Shakespeare deals with each of these characters quite differently, encouraging the audience to be more sympathetic towards some victims rather than others. It must be remembered that this play was effectively a dramatisation of history which had occurred only few centuries previously in the period 1471-1485. It could also be considered a sequel to three other plays that Shakespeare had written about the Monarchy of England, and he would have been aware that some of his audiences would have come with pre-conceived ideas about the characters in this play. The effects of any play depend on its production- different productions will engage different sympathies from an audience. A constant factor may be the plot, theme and language that the actors use, but also the type of stage, costumes, sound effects, acting styles and delivery of the script may differ and have varying impacts on the audience and the way they perceive the characters. In addition, audiences in the 16th century may have lived in poverty and their feelings about their own life situations may have had an impact on feelings towards Richard's character, and the sympathy they felt towards his victims. ...read more.

There are many references to religious language, as with above, making an audience feel pitiful towards the victims, as they are in need of God at such bad times. One line of Clarence's speech which will not only bring pathos, but admiration from the audience is, 'O, spare my guiltless wife and my poor children!' Both of these emotions may be felt as the audience see that he is a man devoted to his family, unlike his brother, who is only there to benefit himself. The audience would admire how he asks for forgiveness, so that his family do not suffer. Lady Anne is also another character who is seen to suffer in Shakespeare's play. We are reminded of the terrible loss that Anne is confronted with; her husband, Edward, who was killed by Richard himself during the civil war: 'wife to thy Edward, to thy slaughtered son'. Automatically a great deal of sympathy is felt as, for any person, the loss of a partner is a tragic event, and the fact that the murder of Edward is present also creates pathos, and Shakespeare engages the audience by the use of a rhetorical questions; Was ever woman in this humour woo'd? Was ever woman in this humour won? I'll have her; but I will not keep her long. Sympathy is created for Lady Anne as Richard has acknowledged and made clear to the audience that she, after helping him fulfil his task of becoming King, shall be dead. The fact that Richard makes the audience aware of his plan only during his soliloquy, not whilst talking to anyone, creates sympathy for Lady Anne and all of his other victims as it highlights his wickedness. ...read more.

In conclusion, I believe that Shakespeare's aim of attracting audience sympathy for some of the characters is very successful. As Richard's plans to become king were put in place as soon as he thought fit, the audience would feel great amounts of sympathy for the other characters as they were merely pawns in Richard's game of chess, and they were destined to be killed in his quest for sovereignty. Shakespeare effectively writes a thrilling plot involving intrigue, murder, jealousy and fear. The theme is effectively portrayed to show that the mightiest can be brought down by the quest for power and ambition. It is obvious to any reader of the Quarto version of the play that the play will evoke emotions such as pity amongst others, as from the title page, we are told that the play is a tragedy. This suggests at the outset that Richard falls from greatness due to a flaw in character, and then words like 'treacherous, pitiful and tyrannical' show the audience what to expect from Richard, so that even before the start of the play, Shakespeare engages the audience to feel hatred towards Richard. The excellent use of confidential soliloquy after each crime, gives the audience more and more evidence that Richard is the most calculating of fiends, being brilliant at fooling, and seducing his victims. This also has the effect of drawing the audience into complicity with his wicked schemes and unsettling the audience as they become unwitting conspirators who are the only ones privy to his evil plans, hence `leading them to feel sympathy towards his victims. In my opinion, the clever use of plot, the theme, the choice of characters and the language used, has made the play into an excellent piece of work, as evidenced by the continuing enjoyment by audiences today. ?? ?? ?? ?? 1 ...read more.