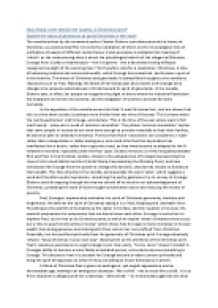 How fitting is the title for the novella, A Christmas Carol? Explore the ideas of generosity of spirit/Christmas in the novel.

Transfer-Encoding: chunked ﻿How fitting is the title for the novella, A Christmas Carol? Explore the ideas of generosity of spirit/Christmas in the novel The novella written by the renowned author Charles Dickens centralises around the theme of Christmas, as a pivotal motif for not only the celebration of Christ, but for its analogous time of unification of people of different social classes. It also possesses a metaphorical meaning of ?rebirth? as the underpinning story is about the physiological rebirth of the allegorical Ebenezer Scrooge from a callous misanthropist ? the rich gentry - into a benevolent being willing to recognise the plight of the working class. This therefore calls for a celebration: Christmas. A time of bestowing material and emotional wealth, which Scrooge has unearthed, and become a part of in the festivity. The theme of Christmas and generosity is exemplified throughout the novella by characters such as Fred, Fezziwig, the Ghost of Christmas past and present and Scrooge as he changes into someone who believes in Christmas and its spirit of generosity. In the novella, Dickens asks, in effect, for people to recognise the plight of those whom the Industrial Revolution has displaced and driven into poverty, and the obligation of society to provide for them humanely. In the exposition of the novella we are told that ?it was Christmas Eve?, and are shown that this is a time when society is perhaps more divided than any time of the year. This is shown when the ?portly gentlemen? visit Scrooge, and declare: ?This is the time of the year where want is felt most keenly?many are in need of common necessities?. ...read more.

Rhetorical tone, asking Scrooge the purpose of his tyrannical ways. This invokes the theme of Christmas, as the ?light? is reminiscent of the generosity symbiotic of Christmas, and therefore the metaphor correlates with the oppression of the underclass ? the rich literally deteriorate the festivity of Christmas. The personification of ?worldly hands? would also implicitly relate to the collective influence of the gentry of society; the word is a very dominating spectacle, inferring that they have the ability to oppress the poor instantaneously. The ghost therefore rhetorically questions this, asking ?would you so soon put out?, referencing the festivity of Christmas when it offers so much. Dickens almost reminds us that the aristocrats of society abuse their power, destroying what God has offered through the use of the apparition giving a biblical connotation. This links with the theme of Christmas, because it insinuates that the Rich feel they don?t have to be merry, as they possess all the material wealth. Whereas, the lower class in actuality possess the spiritual wealth, and kindness associated with Christmas. The Ghost of Christmas recalls a montage of memories to Scrooge, some of which epitomise the disappointments and nostalgic moments of his past. Scrooge revisits his youth as a lonely child isolated on his own and deserted by his family in boarding school: ?Good Heaven!?, ??I was a boy here.? The implicit use of biblical discourse ?Heaven? paralleled with him informing us he was a boy would insinuate that he had a fulfilled childhood, compared with his concurrent valueless state. ...read more.

This quote also alludes to the many miracles Jesus performed, such as allowing people to ?walk? again, which Dickens may use to suggest that the rich aristocrats have the ability to do; they can cure Tiny Tim?s illness, which is as much a miracle to them, as what Jesus performed. Tiny Tim?s illness was likely the result of the inadequate sanitation of sewage, contaminating drinking water. Tuberculosis and cholera caused an endemic especially across large cities. Therefore, Tiny Tim ?hoped? that people would notice his illness, to become proactive, especially the upper-class, whom were complacent with the endemic, as they did not share the same facilities. Dickens uses Tiny Tim as a face for the poor, as they had little political say, as a symbol of hope. He does this through his dire need, and benevolent and courteous attitude. By showing how Christmas is celebrated through the bleakest of places, like a ?solitary lighthouse? it shows that the locations are the last delivery of hope and how even though the most dreadful times, Christmas is still what brings people together. Therefore, our generosity of spirit at Christmas time should be spread across the whole of humanity, even to those who are less fortunate than ourselves. In stave 5, when Scrooge wakes up and realises he must change, it shows his transformation and how he has been reborn to the generosity of Christmas. When he awakes, he euphorically says ?I am here, the shadows of the things that would have been, may be dispelled?. The ?shadows? imply that his true meaning of life was obscured, and that his conscience has now been uncloaked to the spirit of generosity. ...read more.