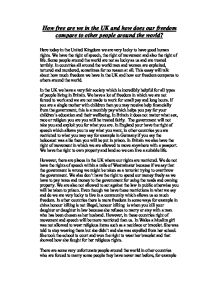 How free are we in the UK and how does our freedom compare to other people around the world?

How free are we in the UK and how does our freedom compare to other people around the world? Here today in the United Kingdom we are very lucky to have good human rights. We have the right of speech, the right of movement and also the right of life. Some people around the world are not as lucky as us and are treated terribly. In countries all around the world men and women are exploited, tortured and murdered, sometimes for no reason at all. This essay will talk about how much freedom we have in the UK and how our freedom compares to others around the world. In the UK we have a very fair society which is incredibly helpful for all types of people living in Britain. We have a lot of freedom in which we are not forced to work and we are not made to work for small pay and long hours. If you are a single mother with children then you may receive help financially from the government, this is a monthly pay which helps you pay for your children's education and their wellbeing. ...read more.

However, in these countries right of movement and speech will be more restricted than us. In Wales a Muslim girl was not allowed to wear religious items such as a necklace or bracelet. She was told to stop wearing them but she didn't and she was expelled from her school. She took the school to court and won the right to wear her bracelet and that showed how she fought for her religious rights. There are some very unfortunate people around the world in other countries who are forced to marry some people they have never met before, for example in India you are made to have a forced marriage sometime with relative like your uncle. Also in some very poor parts of the world you are forced to make paper bags and live in a 2 metre by 2metre house which gets incredibly cramped after a while. For making 200 bags you will only receive 18 pence for them. In places like Guantanamo bay you will be tortured and put in solitary confinement for many years, sometimes for not even doing anything. ...read more.

So amnesty and these other company are helping people all around the world substantially. In conclusion, all of us in England are very lucky to have the right of freedom even though we have some things we are not allowed to say and do we are a very free country. We are trying our hardest to help others in the situation of not having the same human rights. Compared to countries like India, Africa and china we are very lucky to have the right of movement, freedom of speech and the right to life. If we wish to help others in these countries we can give money to charity and maybe even join a group of people who support others around the world. If we join amnesty and send one letter that one letter will give someone who is less fortunate than us to get a bed to sleep on. The other organisations like liberty and Greenpeace have many different ways to help people in other places like Guantanamo get better lives by protesting and spreading news of what these people are going through. ...read more.