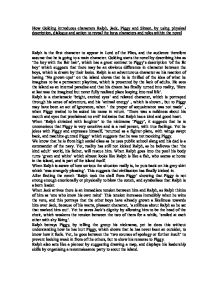 How Golding introduces characters Ralph, Jack, Piggy and Simon, by using physical description, dialogue and action to reveal the boys characters and roles within the novel

How Golding introduces characters Ralph, Jack, Piggy and Simon, by using physical description, dialogue and action to reveal the boys characters and roles within the novel Ralph is the first character to appear in Lord of the Flies, and the audience therefore assume that he is going to a main character. Golding starts the novel by describing him as 'the boy with the fair hair', which has a great contrast to Piggy's description 'of the fat boy' which suggests that there may be an obvious difference in character between the boys, which is drawn by their looks. Ralph is an adventurous character as his reaction of having 'No grown-ups!' on the island shows that he is thrilled of the idea of what he imagines to be a permanent playtime, which is presented by the lack of adults. He sees the island as an internal paradise and that his dream has finally turned into reality, 'Here at last was the imagined but never fully realized place leaping into real life'. Ralph is a charismatic 'bright, excited eyes' and relaxed character, which is portrayed through his sense of adventure, and his 'animal energy' , which is shown , but to Piggy may have been an act of ignorance, when ' the proper of acquaintance was not made' , when Piggy waited to be asked his name in return. ...read more.

Piggy is very fat, has spectacles which are very thick, and has asthma. All of these factors contribute to make him an 'outsider' from the other boys and physically unfit to survive, within the group of boys and the island. He also has a cockney accent, which does not improve his image, and his poor grammar suggests that he comes from a different social background from the other boys, 'I can't hardly move with all these creeper things'. 'The naked crooks of his knees were plump' shows that he is vulnerable, yet he 'removed the thorns carefully' which shows that he is well organised and is concerned of his safety. Yet, he thinks logically, making deductions from what he has observed, 'When we was coming down I looked through one of them windows. I saw the other part of the plane. There were planes coming out of it.' Piggy tries to make friends with Ralph but Ralph just smiles at him 'vaguely' and escapes at the earliest opportunity. Piggy is also not used to being independent and has all the natural characteristics of a victim, 'The fat boy hung steadily at his shoulder.' Piggy is also proud of what other of what others see as weaknesses; 'I was the only one in our school what has asthma.' ...read more.

Jack is conscious of the idea that he can show his emotions due to his skin colour which makes it obvious when he blushes through his freckles, which becomes significant in other chapters when he disguises himself, allowing him to hide his emotions. Throughout the chapter, Jack likes to show how powerful and strong he is, and this carries on throughout the novel. He makes statements to show, through his violent, theatrical actions, 'Jack snatched from behind him a sizable sheath-knife and clouted it into a trunk.' Jack undermines democracy and is extremely brutal toward Piggy when he rejects him, 'We don't want you.' Showing, that dictatorship is starting to push through the democracy. When Jack comes to describe the bushes he slashes at one with his knife, showing that he has a violent character, and is more aggressive than Ralph and Simon. When he comes to murder the pig he can not bring himself to do it, as he still had a bit of civilisation in him, which fades away completely at the end of the novel. Simon is a Christ - like figure and keeps peace within the group and is quite spiritual, which is seen from the description of the bushes .He sees things from a realistic view and their true beauty. At the beginning of the chapter, Simon had fits which shows that he is not adapted to the island. ...read more.