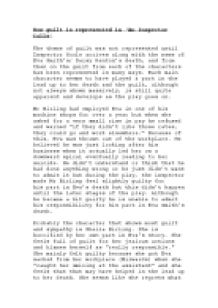 How guilt is represented in 'An Inspector Calls' by JB Priestley

﻿How guilt is represented in ?An Inspector Calls? The theme of guilt was not represented until Inspector Goole arrives along with the news of Eva Smith?s/ Daisy Renton?s death, and from then on the guilt from each of the characters has been represented in many ways. Each main character seems to have played a part in the lead up to her death and the guilt, although not always shown massively, is still quite apparent and develops as the play goes on. Mr Birling had employed Eva in one of his machine shops for over a year but when she asked for a very small rise in pay he refused and warned ?if they didn?t like those rates, they could go and work elsewhere.? Because of this, Eva was thrown out of the workplace. He believed he was just looking after his business when it actually led her on a downward spiral eventually leading to her suicide. ...read more.

angry with herself and feel even worse than she did to start with as the inspector keeps pushing to get more answers from her a quote is - ?but I felt rotten about it at the time and now I feel a lot worse? Gerald seems to be hiding something about Eva from the moment Inspector Goole first mentions her name, and he seems to want to get out of the questioning when he says ?I think I?d better turn in? which could be thought of as him hiding something or just not wanting to say what he really knows. When Sheila picks up on this and at the end of act 1 asks ?How did you come to know this girl ? Eva Smith? he just says ?I didn?t.? Even though it was fairly obvious that he did and later admits that he did know her and he starts to feel a little guilty. ...read more.

While telling his story he exclaims "Oh - my God! - how stupid it all is!" this shows he regrets what he did and he is horrified that his thoughtless actions had such terrible consequences. Although he got a woman pregnant, he was concerned enough to give her money by stealing from his father's office, later wishing he hadn?t, as he knew he couldn?t pay it back. Although he doesn?t show much guilt he seems to almost be in denial as he keeps saying ?This isn?t my fault.? Most of the characters in ?An Inspector Calls? don?t really show much guilt or compassion at the start of the play but as the play develops, the guilt shows more and each character starts to admit their role in Eva Smith?s/Daisy Renton?s death. A quote to show all of this is one that Shelia says - ?You see; we all have to share something. If there's nothing else, we'll have to share our guilt.? This shows that, whether they have expressed it or not, everyone has a role in Eva/Daisy?s death, and they should all have some sort of guilt or regret to show. ...read more.