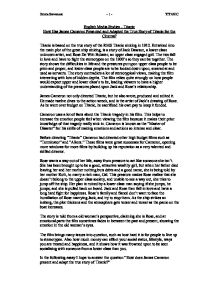 How Has James Cameron Presented and Adapted the True Story of Titanic for the Cinema?

English Media Studies - Titanic How Has James Cameron Presented and Adapted the True Story of Titanic for the Cinema? Titanic is based on the true story of the RMS Titanic sinking in 1912. Entwined into the main plot of the great ship sinking, is a story of Jack Dawson, a lower class unknown artist, and Rose De Witt Bukater, an upper class engaged girl. The two fall in love and have to fight the stereotypes on the 1900's so they can be together. The story shows the difficulties in life and the pressures put upon upper class people to be prim and proper, and lower class people are to be looked down upon, sneered at and used as servants. The story contradicts a lot of stereotypical views, making the film interesting with lots of hidden depths. The film relies quite strongly on how people would expect upper and lower class's to be, leading viewers to have a higher understanding of the pressures placed upon Jack and Rose's relationship. James Cameron not only directed Titanic, but he also wrote, produced and edited it. He made twelve dives to the action wreck, and is the artist of Jack's drawing of Rose. As he went over budget on Titanic, he sacrificed his own pay to keep it funded. Cameron uses a lot of facts about the Titanic tragedy in his film. This helps to increase the emotion people feel when viewing the film because it makes their prior knowledge of that tragedy really sink in. Cameron is known as the "Master of Disaster" for his skills of making emotions and actions so intense and clear. Before directing "Titanic" Cameron had directed other high budget films such as "Terminator" and "Aliens." These films were great successes for Cameron, opening more windows for more films by building up his reputation as a very talented and skilled director. ...read more.

The people from the lower classes are not allowed on the upper decks, and the servants from the wealthy passengers walk their dogs on the lower decks, showing a huge lack of respect from the upper classes. The lower classes constantly move out of wealthy people's way, smile politely and carry of, and are treated like scum. The romance is very exiting because it is controversial and risky. Jack and Rose have to hide their love, and for a while deny it to even themselves. They are both young and attractive, and have been brought up very differently. This in itself is interesting as you get to see how opposites attract. Sometimes Jack will offend Rose by asking her a personal question (for example he asks her if she loves Cal) and she will freeze up, and act very uptight. It takes a while for her to relax into his laid back personality and way of life. He is open and honest while she has been taught to be more private and talk about conventional subjects, not people's love lives. When Jack saves Rose's life, he convinces her that killing herself is not the way to get free from her life. She realises she has to resist her mother and Cal from tying her down, she has to be strong and stand up for herself. Jack gives her the will power to do this and the strength not to back down. He helps her after Titanic sinks even though he isn't there any more, because she remembers his personality and the way he lived life for the moment and didn't try to live up to peoples expectations. This helps her leave her family, change her name and start a new life. Cameron uses many facts from the actual tragedy, but he also adapts lots of them to enhance emotion and drama. He uses actual footage of the wreckage has captured the images of the captains, Mr Esme and Mr Andrews personality's very well. ...read more.

The honour of the captain, Mr Andrews, violinists and other people that went down with the ship deliberately is amazing, and gives a feeling of pride to the viewer when they see how brave people were. Rose always spoke very good, proper English, and Jack spoke more relaxed American. The difference in the language used enhanced the contrasting cultures of the two lovers. Jack is the hero of the film; all the way through it he puts others before himself and always looks out for other people's feelings. When he is dancing with Rose in the lower decks, a small girl he was dancing with before looks disappointed so he reassures her with "don't worry, you're still my special girl!" When Cal tries to get Rose into a life boat, Jack knows he is going to die but still tells Rose he'll be fine, just so she'll save herself. He also runs back for a small child after he is freed from his handcuffs, even though he was risking his life doing it. Rose is the heroin, fighting her own battles against her trapped life, fighting for her happiness and for love. She represents a brave, strong, fiery woman and has many strong qualities that many people wish they had. Cal is the villain; he is selfish, arrogant and heartless. He tries to get Rose on a lifeboat, purely because she has the jewel in her pocket. He also has Jack arrested for a crime he didn't commit and deliberately has Jack left to die handcuffed to a pipe while the ship sinks. He would rather kill a man than face the humiliation of his fianc� falling in love with a lower class person. He represents every evil inside every person, and the evil in everyone's life. These three characters are the extremes of qualities everyone possesses, so everyone can relate to each of them in different ways. This increases the emotions given off by each of the characters. Emma Stevenson - 1 - TITANIC ...read more.