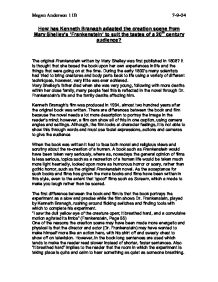 How has Kenneth Branagh adapted the creation scene from Mary Shelley's 'Frankenstein' to suit the tastes of a 20th century audience?

How has Kenneth Branagh adapted the creation scene from Mary Shelley's 'Frankenstein' to suit the tastes of a 20th century audience? The original Frankenstein written by Mary Shelley was first published in 1808? It is thought that she based the book upon her own experiences in life and the things that were going on at the time. During the early 1800's many scientists had tried to bring creatures and body parts back to life using a variety of different techniques, however, very little was ever achieved. Mary Shelley's father died when she was very young, following with more deaths within her close family, many people feel this is reflected in the novel through Dr. Frankenstein's life and the family deaths affecting him. Kenneth Branagh's film was produced in 1994, almost two hundred years after the original book was written. There are differences between the book and film because the novel needs a lot more description to portray the image in the reader's mind; however, a film can show all of this in one caption, using camera angles and settings. Although, the film looks at character feelings, it is not able to show this through words and must use facial expressions, actions and cameras to give the audience When the book was written it had to face both moral and religious views and scrutiny about the re-creation of a human. ...read more.

Again this may be used to bring more realism to modern day audiences, enforcing the idea that 200 years ago many people did think it possible to create such a creature. The setting generally gives the impression that Dr. Frankenstein is not too house proud and cares more about his creation than his house or quality of living. In the small part of the house he has partitioned off for himself the curtains are tainted brown, the mirror covered in dust and the bed unmade this gives a reflection to the audience of how obsessed Dr. Frankenstein is with his creation. Kenneth Branagh uses lighting in the creation scene to show facial expressions but the use of light in the creation scene also shows the energy needed to create this creature, the blue sparks of lightning briefly illuminating the laboratory when he pulls the switch to bring the creature to life shows how much energy is needed to bring the creature to life. This is one of the ways in which Kenneth Branagh enforces the reality of the experiment to the sceptical 21st Century audiences, showing the power of the energy used. Lighting is also used by Branagh to convey the characters expressions'; using very little light in the background makes the audience focus on the characters facial and bodily expressions and actions. Directly after the creation scene when Dr. ...read more.

"It's alive, it's alive" The silences are used to create tension and suspense for the audience but also give the audience time to reflect on what they have heard and feel for the character. This is specifically obvious when the realisation hits Frankenstein. "What have I done? What have I done?" This is followed by six church bells that could be used to represent a new beginning, as in a wedding or Christening bells are used to show the beginning of something new and for Frankenstein this was only the beginning. In conclusion Kenneth Branagh has adapted Mary Shelley's Frankenstein in many ways most of which are because it has been made into a film which uses different methods to portray things such as feelings and emotions which in a book can be written down but in the film these feelings must be shown through the characters themselves. However, he has adapted other things so as to keep realism throughout the film for example in the book there is no mention of the monster being in embryonic fluid, but Kenneth Branagh adapted this so as to portray the feeling that it may not have been such a ridiculous idea to try to create new life from old life and many of the ideas Dr. Frankenstein had were logical and methodical. In doing this Kenneth Branagh may have reduced some of the scepticism in the modern day audience. ?? ?? ?? ?? Megan Anderson 11B 7-9-04 ...read more.