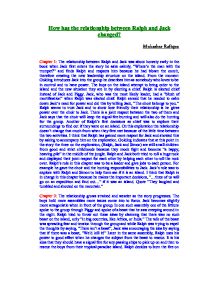 How has the relationship between Ralph and Jack changed?

How has the relationship between Ralph and Jack changed? Mubasher Rafique Chapter 1: The relationship between Ralph and Jack was about honesty early in the book when Jack first enters the story he asks calmly, "Where's the man with the trumpet?" and finds Ralph and respects him because he had blown the conch, therefore creating the new leadership structure on the island. From the moment Golding introduces Jack into the group he describes him as somebody who loves to be in control and to have power. The boys on the island attempt to bring order to the island and the new situation they are in by electing a chief. Ralph is elected chief instead of Jack and Piggy. Jack, who was the most likely leader, had a "blush of mortification" when Ralph was elected chief. Ralph sensed that he needed to calm down Jack's need for power and did this by telling Jack, "The choir belongs to you." Ralph seems to trust Jack and to show how friendly their relationship is he gives power over the choir to Jack. There is a joint respect between the two of them and Jack says that the choir will keep the signal fire burning and will also do the hunting for the group. ...read more.

choir were in charge of was out, he runs up to the fire and finds Jack celebrating the first killing of a pig. This is the final straw for Ralph who is now tired of Jack's disobeying orders in order to fulfil his own selfish needs to kill. The ship passed by and they were once again stuck on the island until the next opportunity arises. Because of Jack they didn't have a hope this time. Jack had taken Sam and Eric from the fireside so that his hunting party could form a full circle in which to trap and kill a pig for meat. This indicates that Jack thinks that savagery and hunting is more important than civilisation, huts and rescue. The tension between Jack and Ralph has now reached its climax and ends with them squaring up to fight. Ralph makes the group see that Jack was wrong to let the ship pass and so Jack attempts to win back favour by bullying Piggy who had now made his way up the mountain. Once Jack "stuck his fist into Piggy's stomach" whatever link was left in the relationship between Ralph and Jack, was "snapped". I think that in this chapter Ralph's leadership has come back stronger and he is more confident as he calls for the meeting. ...read more.

Jack calls him a coward, and Ralph finally agrees to go on the hunt simply to regain his position as leader in the eyes of the group. Simon volunteers to return to the beach to tell Piggy and the littluns that they will not return until late that night. Ralph, Roger, and Jack start to climb the mountain; then Ralph and Roger wait at the halfway point while Jack climbs alone to the top. He returns, breathlessly claiming to have seen the monster. Ralph and Roger climb up to have a look and see a terrifying image: a large, shadowy form, with the shape of a giant ape, making a strange flapping sound in the wind. Horrified, the boys hurry down the mountain to warn the group. In this chapter I think that Jack is in charge because he decides to hunt the boar and climb the mountain. Ralph agrees just because he wants to prove to Jack that he is not scared. Quote "Ralph heard the mockery and hated Jack." The relationship between Ralph and Jack is weakened because of Jack and his savageness, his selfishness and his greed for power, against Ralph's intelligence, hard work and skill in trying to build a civilised and orderly environment for the boys to live in. ...read more.

This essay begins well, considering the question and analysing the text in order to address the question. As the essay progresses the focus becomes on retelling the story rather than on the analysis of language, structure and form and addressing the question.