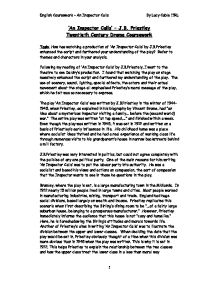 How has watching a production of 'An Inspector Calls' by J.B.Priestley enhanced the script and furthered your understanding of the play? Refer to themes and characters in your analysis.

'An Inspector Calls' - J.B. Priestley Twentieth Century Drama Coursework Task: How has watching a production of 'An Inspector Calls' by J.B.Priestley enhanced the script and furthered your understanding of the play? Refer to themes and characters in your analysis. Following my reading of 'An Inspector Calls' by J.B.Priestely, I went to the theatre to see Daldry's production. I found that watching the play on stage massively enhanced the script and furthered my understanding of the play. The use of scenery, sound, lighting, special effects, the actors and their actual movement about the stage all emphasised Priestley's moral message of the play, which he felt was so necessary to express. The play 'An Inspector Calls' was written by J.B.Priestley in the winter of 1944-1945, when Priestley, as explained in his biography by Vincent Brome, had "an idea about a mysterious inspector visiting a family... before the (second world) war." The entire play was written "at top speed,..." and finished within a week. Even though the play was written in 1945, it was set in 1912 and written on a basis of Priestley's early influences in life. His childhood home was a place where socialist ideas thrived and he had a real experience of working class life through numerous visits to his grandparent's house in narrow backstreets behind a mill factory. J.B.Priestley was very interested in politics, but could not agree completely with the policies of any one political party. One of the main reasons for him writing 'An Inspector Calls' was to put the labour party into authority. He was a socialist and based his views and actions on compassion, the sort of compassion that the Inspector wants to see in those he questions in the play. Brumley, where the play is set, is a large manufacturing town in the Midlands. In 1912 nearly 15 million people lived in large towns and cities. ...read more.

As the final curtain falls, Sheila, Eric and Edna (the Birling's maid) are standing, facing the audience, at the front of the curtain, with the Birlings and Gerald Croft in the house, but in front of them the extras stand, and when Mr.Birling tells of the news from the police, whom he answers the phone to, the extras almost force open the house. Sheila, Eric and Edna represent the coming of a new era in society and are facing up to what they have done and wanting to do something about it, whereas the older generation of the Birlings and Gerald are hidden away in their house and I felt, when watching the performance, they were being left behind in their old, class-ridden world as they chose to ignore reality and were not shown as being responsible for their actions. Also, the extras were left standing in front of the Birlings to represent there forthcoming equality in the world. They were used as visual metaphors for Priestley's ideas. In addition, the play could become slightly didactic and just seem to be enforcing Priestley's moral message. However, the playwright avoids this and keeps the play entertaining and dramatic. This is done by the constant theme of "whodunit?" within the plot, as the Inspector's motive is to systematically question the Birlings about their role in Eva Smith's death. Priestly also creates a sense of mystery in the Inspector through his name - "Inspector Goole". The name "Goole" is obviously a pun of 'Ghoul' conjuring up images of ghosts and the supernatural, which is perhaps how Priestley wanted the Inspector to appear, as the Birling's conscience even. The photograph the Inspector shows to the characters in the play becomes a puzzle to the Birlings, and the audience towards the end of the play, as they discover he could have shown different photographs to all of them. However, despite whether the photographs were the same or not, I think Priestley wants us to realise that it doesn't matter and the literal image of the photograph is representative of the many Eva Smith's of the world. ...read more.

Naturally, the costumes the Birling's wear (in Daldry's production) reflect their personalities as well as the time period and social status. All of the Birlings begin wearing very formal dress. The men wear suits and the women, luxurious dresses. However, underneath the posh dresses and suits, are selfish and shallow characters. The technique of costume design is used by Daldry, to hide the Birling's shallowness and allow them to 'put on a front'. In particular, Sheila is first portrayed as innocent and young, as she wears a white dress in Daldry's production of the play. Differing is Mrs.Birling who wears a very grand, red dress to symbolise bold and arrogant character. Daldry's choice of costume is suitable, as at the beginning of the play, Sheila refers to Mr.Birling as "Daddy". This creates an image of Sheila being a child and children are often perceived as innocent. On the other hand, Mrs.Birling is clearly very self-important and speaks with a tone of authority and important in Priestley's play. For example, when Sheila says Eric is "squiffy", she replies with: "What an expression, Sheila! Really the things you girls pick up these days!" Also, she treats Edna, the maid, with a lack of respect (showing her feeling that she is socially correct). She orders Edna about: "All right, Edna. I'll ring from the drawing-room when we want coffee." The fact that the Birlings have a maid shows their social superiority. In addition, in Daldry's production, the extra's clothing is not so luxurious and generally dark grey. For me, this echoes a dirt, damp atmosphere that the lower classes were referred to as being, which can be related back Priestley's social message of the play. But, Edna is a lot more involved in Daldry's production than in the actual play. Towards the end of the play, she sits on the Birling's chair to indicate that she is on a level with them and no longer inferior. The costume of the Inspector differs again from the Birlings and also the extras. He is dressed in a grey mackintosh and wears a fedora. ...read more.