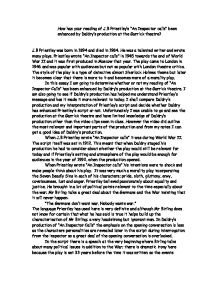 How has your reading of J.B Priestley's &quot;An Inspector calls&quot; been enhanced by Daldry's production at the Garrick theatre?

A fake!" All the characters except Sheila and Eric are very excited and the language Priestley has used portrays this. The house then remakes itself and they all get back into the house other than Eric and Sheila who stay outside with Edna. The Inspector in Priestley's script is described as creating an impression of massiveness, solidity and purposefulness'. In the script he enters the Birlings' house and is reasonably polite to the family. Priestley never quite explains the character of the inspector: 'is he a realistic straightforward police inspector, a hoaxer, or in his omniscience, something more'. The Inspector's name reveals Priestley's intentions for this character a great deal. Inspector Goole gives an impression of something ghost or 'ghoul' like to give an aura of mystery and at the end of the play to leave the audience to make up their own mind as to whether he was a ghoul, time traveller or a hoaxer. Also the inspector acts as a teacher to both the characters and to the audience as in his speeches contain morals for the characters to learn from and the reader or audience to take home with them. Near the end of the play he makes a speech about society which is still relevant today: " We are members of one body. We are responsible for each other" The language used 'we' involves the audience and makes them reflect on the message in Priestley's script. Daldry's Inspector Goole was far more intimidating and very sinister looking. He stays outside the house and manages to verbally pull the Birling family out of their secure, safe world in their house. In Daldry's production he gives the idea that the Inspector is in some way a time traveller. The inspector's costume was not particularly dated so could easily have been from the 1940s or the year 2000. In his entrance he is seen giving an orange to a boy who is dressed in war- time clothing this is a symbol of the war as oranges were very rare during World War II. ...read more.

The sound and lighting together helped create a good, extreme atmosphere to keep the audience on their seats. Daldry had to keep the audience's complete attention throughout the whole of the production which could have proved difficult as when Priestley wrote "An Inspector calls" he intended it to be in three acts and Daldry produced it in one act with no interval. In conclusion having not seen the whole of Stephen Daldry's production of "An Inspector calls" I think that from the video and analysis of his production Daldry's production has enhanced my reading of "An Inspector calls". He has made the story a lot more interesting and easier to visualise and get a hold of the plot then reading the script where no real atmosphere is created other than in the reader's imagination. To have it acted and set out helps a great deal to see the moral social issues that Priestley intended us the audience to see. From seeing parts of Daldry's production it has not changed my mind as to who was most responsible for Eva Smith's death as I still think that Eric played the worst part in her suicide. It has definitely changed my mind as to who is the worst character as I now see Mrs Birling as a mean, self righteous woman as before I thought that Eric was also the worst character as well being responsible for Eva's death. This is because Daldry's very unsympathetic portrayal of Mrs Birling actually leaves the audience feeling that she is most responsible, as she does not learn from Priestley's message. The play "An Inspector Calls." and its message is still enormously relevant today as although society advances and changes, government issues and opinions on them are still down to the individual. Unfortunately there are still people like Mr and Mrs Birling in society and I feel that audiences watching "An Inspector Calls" will all have someone perhaps themselves that they can relate to when identifying with these characters. Charlotte Field 10P ...read more.