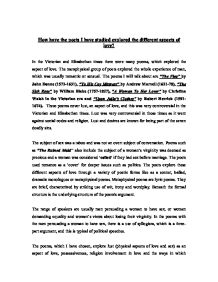 How have the poets I have studied explored the different aspects of love?

How have the poets I have studied explored the different aspects of love? In the Victorian and Elizabethan times there were many poems, which explored the aspect of love. The metaphysical group of poets explored the whole experience of man, which was usually romantic or sensual. The poems I will talk about are "The Flea" by John Donne (1572-1631), "To His Coy Mistress" by Andrew Marvell (1621-78), "The Sick Rose" by William Blake (1757-1827), "A Woman To Her Lover" by Christina Walsh in the Victorian era and "Upon Julia's Clothes" by Robert Herrick (1591-1674). These poems cover lust, an aspect of love, and this was very controversial in the Victorian and Elizabethan times. Lust was very controversial in those times as it went against social codes and religion. Lust and desires are known for being part of the seven deadly sins. The subject of sex was a taboo and was not an overt subject of conversation. Poems such as "The Ruined Maid" also include the subject of a woman's virginity was deemed as precious and a woman was considered 'soiled' if they had sex before marriage. The poets used romance as a 'cover' for deeper issues such as politics. The poets explore these different aspects of love through a variety of poetic forms like as a sonnet, ballad, dramatic monologues or metaphysical poems. Metaphysical poems are lyric poems. They are brief, characterized by striking use of wit, irony and wordplay. Beneath the formal structure is the underlying structure of the poem's argument. ...read more.

Here Donne as the narrator is exaggerating using a hyperbole to convince his lady that the death of the flea would mark the death of their love. Similarly in 'To His Coy Mistress' Marvell uses a hyperbole as a form of persuasion from lines 5-8: Thou by the Indian Ganges' side Shouldst rubies find; ...' Here Marvell is exaggerating that the gentleman would do if he had time. Marvell mostly uses persuasion by trying to scare the gentleman's lover and uses imageries of time and deaths: 'Time's winged chariot hurrying near; And yonder all before us lie Deserts of vast Eternity.' The gentleman is saying she should, therefore, sleep with him and not waste her life. Here Marvell uses a metaphor, 'Time's winged chariot hurrying near', and he is saying that time is running, out and expresses this by saying the chariot is time and its hurrying near, so they must sleep with each other before time is over. Donne on the other hand cleverly uses a flea as an extended metaphor throughout the poem. Marvell's use of wit in 'To His Coy Mistress' to persuade his lover to have sex with him is engineered into form of a pun: 'Thus, though we cannot make our sun Stand still, yet we will make him run' He is saying here that though we cannot extend our lives, we can shorten them in sexual relations. The pun here is the use of sun is a homophone of son. Therefore having sexual relations may lead to a son and the use of this makes reference to sleeping with each other. ...read more.

They tried to control their lovers to do what they want and this is evident in the persuasive techniques used by both Donne and Marvell. The sexual imagery used by Donne in 'The Flea' depicts a man's view in those times, of only having a physical relationship with their lovers. Herrick in 'Upon Julia's Clothes' also has a dominant theme of lust and uses sexual connation like Donne and Marvell has done. Both Donne and Marvell use syllogism and I like metaphysical poems very much, like 'To His Coy Mistress', because reading those poems is filled of surprises and you can never imagine how the poet be so creative to take the flood, the Jews or the worms in graves to link with his great love and lust; the flea links to their sexual relationship. Walsh's poem, 'A Woman to Her Lover' explores a woman's view of a marriage and her relationship with her lover. This poem reinforces that in those times men wanted their lovers to please them and made them act like slaves. It also portrays that women were extremely religious and it is evident that they are reluctant to have sex before marriage. 'The Sick Rose' shows the dangers that having sex before marriage will turn the woman into an outcast and this again shows that these were the problems the society had in those times. It reveals the darker side of love/lust which was portrayed to be good by Marvell, Herrick and Donne in their poems. So these poems using many literary devices show what love was depicted by both men and women in those times. ...read more.