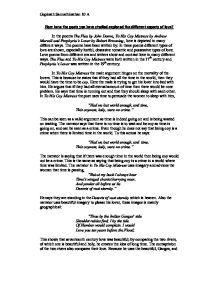 How have the poets you have studied explored the different aspects of love?

How have the poets you have studied explored the different aspects of love? In the poems The Flea by John Donne, To His Coy Mistress by Andrew Marvell and Porphyria's Lover by Robert Browning, love is depicted in many different ways. The poems have been written by. In these poems different types of love are shown, especially lustful, obsessive romantic and possessive types of love. Love poems from different era and writers show and contrast love in many different ways. The Flea and To His Coy Mistress were both written in the 17th century and Porphyria's Lover was written in the 19th century. In To His Coy Mistress the main argument hinges on the mortality of the lovers. This is because he states that if they had all the time in the world, then they would have the time to be coy. Here the male is trying to get his lover into bed with him. He argues that if they had all eternal amount of time then there would be now problem. He says that time is running out and that they should sleep with each other. In To His Coy Mistress the poet uses time to persuade the women to sleep with him, "Had we but world enough, and time, This coyness, lady, were no crime." This can be seen as a valid argument as time is indeed going on and is being wasted on waiting. ...read more.

The poet is saying that their blood has been mingled in the flea, so there is nothing wrong in sleeping with each other as their blood has already mingled. In the seventeenth century, people believed that during sexual intercourse the blood mingled, "It suck'd me first, and now sucks thee, And in this flea our two bloods mingled be. Thou know'st that this cannot be said" The poet is saying that their two bloods has mingled as the flea sucked his blood first and then sucked the woman's blood their blood has mingled, he is saying that they should do it for real as well, as in a way they have slept with each other in the flea as their blood has mingled. The poet then uses religion to try and get her to sleep with him. "This flea is you and I, and this Our marriage bed, and marriage temple is." He is saying that this flea is their marriage bed, and uses faith to back up his argument. He also says "marriage bed" to make the lady think that what they are doing is right. He makes as if they are married. Also by saying this he is stating that they will do no wrong as they are married already due to their blood mingling in the flea. If you are married to the woman it is not wrong to have sex with her. He also tries to subdue the lady my making her look guilty: "And sacrilege, three sins in killing three. ...read more.

No pain felt she;" He kills her so that she could be with him forever, and here the idea of obsession is conveyed by the author. He realises that she will one day not come and kills her to keep her with him. He kills her with her own hair. He then toys with her corpse, opening the eyes and propping the body up against his side. He sits with her body this way the entire night, the speaker remarking that God has not yet moved to punish him. "And thus we sit together now, And all night long we have not stirred, And yet God has not said a word!" He stays with her the whole night without moving and sleeping with her dead body. This shows he does not care whether she is dead or alive as long she is there he is happy. He makes reference to God not punishing him, this means that what he had done was good and for the good of the society because she overcome the society to see him. Here the poet is trying to teach others like Porphyria a lesson. The poets of pre 1914 poems have explored many different aspects of love using different ideas. In To His Coy Mistress the idea of lust and persuasion can be seen. The same can be seen in The Flea as well as persuasion. However Porphyria's Lover conveys the idea of obsession. The authors achieve this by using imagery, rhyming couplets, and oxymoron words. ?? ?? ?? ?? Gopinath Sannathinathan 10 A ...read more.