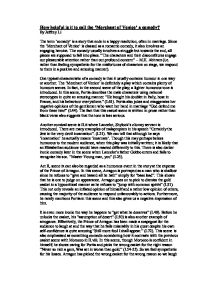 How helpful is it to call the 'Merchant of Venice' a comedy?

How helpful is it to call the 'Merchant of Venice' a comedy? By Jeffrey Li The term 'comedy' is a story that ends in a happy resolution, often in marriage. Since the 'Merchant of Venice' is classed as a romantic comedy, it also involves an engaging heroine. The comedy usually involves a struggle but towards the end, all pieces are supposed to fall into place. "The characters and their discomfitures engage our pleasurable attention rather than out profound concern" - M.H. Abhram (i.e. rather than feeling sympathetic for the misfortunes of characters on stage, we respond to them in a positive and amusing manner). One typical characteristic of a comedy is that it usually contains humour in one way or another. The 'Merchant of Venice' is definitely a play which contains plenty of humours scenes. In fact, in the second scene of the play; a lighter humorous tone is introduced. In this scene, Portia describes the male characters using national stereotypes in quite an amusing manner. "He bought his doublet in Italy, hose in France, and his behaviour everywhere." (L61). Portia also jokes and exaggerates her negative opinions of the gentlemen who want her hand in marriage "God defend me from these two!" (L44). The fact that this casual scene is written in prose rather than blank verse also suggests that the tone is less serious. Another comical scene is II.ii where Lancelot, Shylock's clumsy servant is introduced. There are many examples of malapropism in his speech "Certainly the Jew is the very devil incarnation". (L21). We can tell that although he says 'incarnation' he actually means 'incarnate'. Though this may perhaps be less humorous to the modern audience, when this play was initially written; it is likely that an Elizabethan audience would have reacted differently to this. There is also darker ironic comedy later in the scene when Lancelot's father Gobbo enters and fails to recognise his son. ...read more.

However, despite all of the comedic factors that this play contains, there are also areas in this play which could perhaps be related to the storyline of a tragedy. A 'Shakespearean Style Tragedy' usually involves a fall from a great height, resulting in death. The actions of the main characters give us a sense of waste and they "arouse pity and fear" (Aristotle). Furthermore, the main character in a tragedy also has a fatal flaw in himself that leads to his own downfall. In 'The Merchant of Venice', Shylock is perhaps one of the characters that plays a tragic role in this story. When we first see him in Act I Scene iii, he elicits our sympathy when we see all the misery that Antonio has put him through. "You call me misbeliever, cut-throat dog, And spit upon my Jewish gabardine." (L103-104). Though it is arguable that Shylock could be exaggerating his grievances, Antonio's response fully reassures the audience that everything that Shylock speaks is true "I am as like to call thee so again, to spurn thee too." (L123). Some may argue that it is not possible to sympathise with Shylock for his malicious nature and his desire for a pound of Antonio's "fair flesh" (L143). One must think if he's acting in such a twisted manner; what could Antonio have possibly done to turn him into something like this? Because of this, I believe that the way he acts would make us feel even more sympathetic towards him. In spite of our sympathy, the misery Antonio has placed him through has left him with a fatal flaw that leads tragic characters to their downfall. This fatal flaw is the "Ancient grudge" that he bears for Antonio and his sheer desire for revenge against him. There are many examples in the play where we are able to see his ruthlessness and vindictive character. ...read more.

Also, despite the fact that the tragic character of Shylock may have left the play; there are still a few areas where he is hinted at in the final scene. "The man that hath no music, is fit for treasons, stratagems etc..." (L85). Since it is known for Shakespeare to generally relate positive things with music, it is unlikely that Lorenzo is referring to anyone else. However, this comment seems to reflect ironically upon Lorenzo when we consider what he has done in the past. He was in fact the one that used treasons and stratagems to win Jessica over and steal her from Shylock. It makes him appear a little hypocritical in his speech. Portia is also guilty of this when she speaks of her "good deed in a naughty world." (L91). But when we think about all the pain Shylock has been put through, her actions were not necessarily a 'good deed'. Lastly, in Act V; Antonio (though reunited with his money) is not united with any female in this play. He has no lover to share his fortunes with and this shows that Act V is perhaps not an entirely 'neat or happy ending' and effectively shows that the ending of the "Merchant of Venice" may not be entirely comical after all. In the end however, I would say it is quite useful to classify 'The Merchant of Venice' as a comedy. Even though many would argue that the it is a tragicomedy (with elements of both a tragedy and a comedy) or a problem play (a play that is difficult to characterise), there are very few films that are entirely clear cut with elements of only one type of play. For example, when we look at Macbeth - there are some elements of humour in the play (Porter scene as Mac Duff enters Macbeth's castle) but no one has ever doubted that the play is a tragedy. Tragic plays can have comic elements and comedic plays can have tragic elements. I believe that since 'The Merchant of Venice' predominantly contains comic elements, it should be classified as a comedy. ...read more.