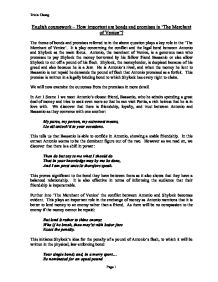 English coursework - How important are bonds and promises in 'The Merchant of Venice'? The theme of bonds and promises referred to in the above question plays a key role in the 'The Merchant of Venice'. It is play concerning the conflict and the legal bond between Antonio and Shylock as the main focus. Antonio, the merchant of Venice, is a generous man who promises to pay Shylock the money borrowed by his fellow friend Bassanio or else allow Shylock to cut off a pound of his flesh. Shylock, the moneylender, is despised because of his greed and also because he is a Jew. He is Antonio's rival, and when the money he lent to Bassanio is not repaid he demands the pound of flesh that Antonio promised as a forfeit. This promise is written in a legally binding bond to which Shylock has every right to claim. We will now examine the outcomes from the promises in more detail. In Act 1 Scene 1 we meet Antonio's closest friend, Bassanio, who he admits spending a great deal of money and tries to seek even more so that he can visit Portia, a rich heiress that he is in love with. We discover that there is friendship, loyalty, and trust between Antonio and Bassanio as they converse with one another: My purse, my person, my extremest means, Lie all unlock'd to your occasions. This tells us that Bassanio is able to confide in Antonio, showing a stable friendship. ...read more.

However she withdraws herself from telling him the correct casket which shows significance to the theme of bonds as she still holds great respect for her father: ...I could tech you How to chose right, but then I am forsworn; As he chooses the correct casket the, bonds and the audience senses promises that are to be made within their marriage. This is important to above question as the theme of love is interlocked with the theme of bonds. Not only is there is idea of exchanges in their spiritual bond, but their love is also expressed symbolically by a ring: I give them with this ring; Which when you part from, lose, or give away, Let it presage the ruin of your love, And be my vantage to exclaim you. From this, the audience can deduce that bond between Bassanio and Portia has some sort of physicality to it. This plays an important role in promises within the marriage as it is a tradition to have the exchange of rings, thus reinforcing the theme of bonds and promises in 'The Merchant of Venice'. However this ring doesn't necessarily prove their true love to one another as later in the play Bassanio gives the ring away to a lawyer. To Bassanio's unawareness, the lawyer is a disguised Portia. Portia tests Bassanio's loyalty to her and asks for the ring as a 'thank you' gift. ...read more.

If you deny me, fie upon your law! Again we see the strong demand of Shylock as he is confident that he should get his bond. Shakespeare has heavily concentrated on this aspect of the bond that the audience is drawn in closer to the story as they are held in suspense. Not only do we see the legal bond in this scene but the bond between Antonio and Bassanio. The loyalty that Bassanio has for Antonio is great as he offers to pay Shylock double the amount that was lent, and even allow the latter to have his own flesh and blood: The Jew shall have my flesh, blood, bones, and all, Again this can be related back to the idea of bonds and promises as it shows that a physical bond doesn't have to exist in order to show the strength of a relationship. As the trial scene continues Portia, disguised as a lawyer, has enabled herself to go by a strategy where the contract for Antonio's pound of flesh can be discharged. And in the end, is was not Antonio who lost, but it was Shylock as he was forced to surrender his money and be forced to convert into a Christian. This harsh result could be said to have come from the story line concerning the bond. This devastating point for Shylock may have kept the audience keen, and as a result it shows that the importance of bonds and promises play a key role in 'The Merchant of Venice'. Tricia Chong Page 1 ...read more.