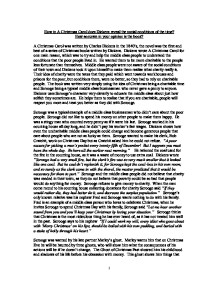 How in A Christmas Carol does Dickens reveal the social conditions of the time?How accurate in your opinion is the book?

How in A Christmas Carol does Dickens reveal the social conditions of the time? How accurate in your opinion is the book? A Christmas Carol was written by Charles Dickens in the 1840's, the novel was the first and best of a series of Christmas books written by Dickens. Dickens wrote A Christmas Carol for one main reason, which was to try and help the middle class people to understand the conditions that the poor people lived in. He wanted them to be more charitable to the people less fortunate than themselves. Middle class people were not aware of the social conditions of their town and Dickens took it upon himself to make them realise what charity really is. Their idea of charity were the taxes that they paid which went towards workhouses and prisons for the poor, but conditions there, were no better, so they had to rely on charitable people. The book was written very simply using the idea of Christmas being a charitable time and Scrooge being a typical middle class businessman who never gave a penny to anyone. Dickens uses Scrooge's character very cleverly to educate the middle class about just how selfish they sometimes are. He helps them to realise that if you are charitable, people will respect you more and treat you better as they did with Scrooge. ...read more.

The Ghost of Christmas Past shows him a shadow of his one true love and what she really thought of him. "...you who, in your very confidence in her, weigh everything by Gain..." In the same way the Ghost of Christmas Present shows Scrooge what Christmas is will be like this year without him and how it could be him celebrating with them too. He also reveals what people think of Scrooge. Over Bob Cratchits' Christmas dinner Mrs Cratchit refuses to drink to the health of Scrooge. She says "It should be Christmas Day, I am sure, on which one drinks the health of such an odious, stingy, hard, unfeeling man as Mr Scrooge." None of the Cratchits cared about Scrooge. "The mention of his name cast a dark shadow on the party, which was not dispelled for a full five minutes." This is a contrast with what really happens when the large turkey from Scrooge is delivered on Christmas Day. Even Scrooge's nephew feels sorry for him. "Who suffer by his ill whims! Himself, always......for I pity him." Scrooge was touched in the same way as the reader is by Tiny Tim. "...even Tiny Tim, excited by the two young Cratchits, beat on the table with the handle of his knife, and feebly cried Hurrah!" ...read more.

Work began at six o'clock in the morning and prisoners usually spent the whole day completing pointless tasks. Many of the tasks the prisoners were made to do were sometimes degrading, they were often exhausting and they always meant that the prisoners had to repeat the same strenuous task over and over again for no particular reason. The treadmill was made up of a treadwheel, a big iron frame of steps around a revolving cylinder. The convicts were required to trudge up the steps in separate compartment for six hours a day. Some were made to turn a crank in a box of gravel, completing ten thousand revolutions (turns of the crank) before their labour was considered done. Other punishments were to pick pieces of old rope to pieces through the use of iron in the building of ships and rendered the resultant oakum (little bit of the rope) virtually unsaleable. Dickens interpretation of the treadmill was very brief, yet Scrooge saw it as an escape from poverty for the poor. "The Treadmill and the Poor Law are in full vigour, then?" Dickens description of the treadmill wasn't anything like the reality. In A Christmas Carol Dickens's aim was to change people like Scrooge into people who are charitable and caring towards the poor. I think that the book was written in such a skilful way that it served its purpose in a rewarding way. ?? ?? ?? ?? 3 1 ...read more.