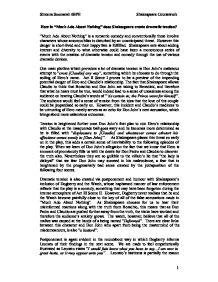 How in &quot;Much Ado About Nothing&quot; does Shakespeare create dramatic tension?

How in "Much Ado About Nothing" does Shakespeare create dramatic tension? "Much Ado About Nothing" is a romantic comedy and conventionally these involve characters whose amorous bliss is disturbed by an unanticipated threat. However this danger is short-lived and their happy fate is fulfilled. Shakespeare sets about adding interest and diversity to what otherwise could have been a monotonous series of events with the creation of dramatic tension and comedy through the use of various dramatic devices. One main plotline which provokes a lot of dramatic tension is Don John's malicious attempt to "cross [Claudio] any way", something which he chooses to do through the soiling of Hero's name. Act II Scene I proves to be a preview of the impending potential danger of Hero and Claudio's relationship. The fact that Shakespeare allows Claudio to think that Borachio and Don John are taking to Benedick, and therefore that what he hears must be true, would indeed lead to a sense of uneasiness among the audience on hearing Claudio's words of "'tis certain so; the Prince woos for himself". The audience would feel a sense of tension from the idea that the love of this couple could be jeopardised so early on. ...read more.

owe you" - that he is rewarded with the knowledge that his first love lives on and he need no longer feel guilty. In contrast to the often intense storyline concerning Hero and Claudio, the relationship between Beatrice and Benedick proves to be overall more comic and entertaining. The fact that the two relationships are very diverse in this play proves to be very important, as the humour from one story line can be used to alleviate tension from another, thus creating an interesting dramatic interest and emotional rollercoaster for the audience. With this storyline, Shakespeare sets up tension leading to the declaration of love between Beatrice and Benedick from the very opening of the play. This is immediately apparent as soon as Beatrice asks the messenger "is Signor Mountanto returned from the wars or no?" (Act I scene I). This nickname she gives for Benedick implies what Leonato later confirms, "there is a kind of merry war betwixt Signor Benedick and her: they never meet but there is a skirmish of wit between them". This wit is demonstrated shortly after this comment is made, with the pair engaging in what may resemble the now common playground teasing between enamoured pairs in denial. ...read more.

Although the pair have confirmed their love to themselves, they have yet to declare to the other characters, or even to each other, and therefore the dramatic tension is sustained until the end of the play. This not only gives this romantic comedy its appropriate ending but also signifies the importance of written evidence in the play, for it is Beatrice's letter and Benedick's sonnet that eventually effect what the audience, and perhaps many of the people in the play, have been waiting for: a public declaration of love. Shakespeare's skilful creation of dramatic tension, is best appreciated when we note that much of the fuss in the play was unwarranted. Beatrice and Benedick knew deep down that they were still in love with one another; they only had to admit this to themselves and not be afraid of taking the first step. Furthermore, if Claudio had trusted Hero more, and was not so gullible, perhaps he would not have allowed himself to be deceived by Don John's trickery. Therefore Shakespeare had to literally make something out of nothing. As, indeed, much of the play concerns itself with "Much Ado About Nothing", the play can be seen as a message that scepticism is not always the best option in life, as it leads to unnecessary turmoil and heartache. ...read more.