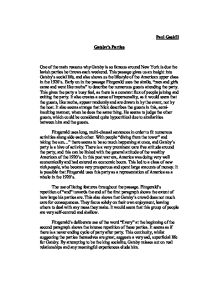 How is atmosphere created at Gatsby's party?

Paul Gaskill Gatsby's Parties One of the main reasons why Gatsby is so famous around New York is due the lavish parties he throws each weekend. This passage gives us an insight into Gatsby's social life, and also shows us the lifestyle of the American upper class in the 1920's. Early on in the passage Fitzgerald uses the simile, "men and girls came and went like moths" to describe the numerous guests attending the party. This gives the party a busy feel, as there is a constant flux of people joining and exiting the party. It also creates a sense of impersonality, as it would seem that the guests, like moths, appear randomly and are drawn in by the event, not by the host. ...read more.

This led to a class of new rich people, who became very prosperous and spent large amounts of money. It is possible that Fitzgerald uses this party as a representation of America as a whole in the 1920's. The use of listing features throughout the passage. Fitzgerald's repetition of "and" towards the end of the first paragraph shows the extent of how large his parties are. This also shows that Gatsby's crowd does not much care for consequences. They focus solely on their own enjoyment, leaving others to deal with any mess they make. It would seem that this group of people are very self-centred and shallow. Fitzgerald's deliberate use of the word "Every" at the beginning of the second paragraph shows the intense repetition of these parties. ...read more.

He seems to be taken in by the luxury and splendour displayed at the party, and seems to respect things like the "gins and liquors" that really aren't that important. The fourth paragraph gives us quite a clear indication of Nick's views on the sort of people that attend Gatsby's parties. Nick believes the guests at the party to be self absorbed. He mentions "introductions forgotten on the spot" and "enthusiastic meetings between women who never knew each other's names." However there seems a division within him in this paragraph, as he again seems highly impressed with the array of musical instruments displayed by the orchestra, and is excited by the materialism shown. Fitzgerald could be trying to show that it is difficult not to be won over by vast wealth. ...read more.