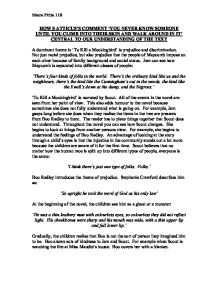 How is Atticus&amp;#146;s Comment &amp;#145;You Never Know Someone Until You Climb Into Their Skin and Walk Around In It&amp;#146; Central To Our Understanding of the Text.

HOW S ATTICUS'S COMMENT 'YOU NEVER KNOW SOMEONE UNTIL YOU CLIMB INTO THEIR SKIN AND WALK AROUND IN IT' CENTRAL TO OUR UNDERSTANDING OF THE TEXT A dominant theme in 'To Kill a Mockingbird' is prejudice and discrimination. Not just racial prejudice, but also prejudice that the people of Maycomb impose on each other because of family background and social status. Jem can see how Maycomb is separated into different classes of people: 'There's four kinds of folks in the world. There's the ordinary kind like us and the neighbours, there's the kind like the Cunningham's out in the woods, the kind like the Ewell's down at the dump, and the Negroes.' 'To Kill a Mockingbird' is narrated by Scout. All of the events in the novel are seen from her point of view. This also adds humour to the novel because sometimes she does not fully understand what is going on. ...read more.

His cheekbones were sharp and his mouth was wide, with a thin upper lip and full lower lip.' Gradually, the children realise that Boo is not the sort of person they imagined him to be. Boo shows acts of kindness to Jem and Scout. For example when Scout is watching the fire at Miss Maudie's house. Boo covers her with a blanket. Another example is when Jem tore his trousers of the Radley fence and then they reappear mended. The whole novel is about breaking down prejudices by understanding other people. The children understand Tom Robinson, but the community still remain prejudice. Even though it is clear that Mayella lied about the rape, Tom Robinson is still found guilty of a crime that he could not have possibly committed. Judge Taylor does his beat to make sure Tom Robinson has a fair trial by appointing Atticus to defend him. ...read more.

Aunt Alexandra also has similar prejudice attitudes as Miss Crawford. Aunt Alexandra is racially and sexually stereotypical. She requests to get rid of Calpurnia, but Atticus refuses. Atticus respects and values Calpurnia, but to Aunt Alexandra, Calpurnia is just a Negrro. Mrs Dubose is a neighbour of the Finches' and she frightens the children with her unkind remarks. One day Jem loses his temper and destroys her camellias. This makes Atticus very angry and as a punishment Jem has to read to Mrs Dubose for a month. Scout also goes with him. Scout realises that the reading sessions increase daily in length. The children used to think that she was horrible until they out themselves in her shoes: 'Jem and I hated her.' Mrs Dubose had become addicted to morphine, and without realising it, the children helped her overcome her addiction. When she dies Atticus explains the important part Jem and Scout played in helping her. Atticus talks about Mrs Dubose as the bravest women he ever knew. Meera Pithia 11B ...read more.