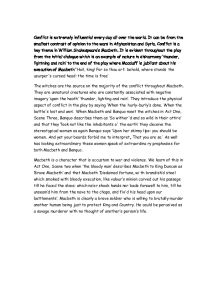 Conflict is extremely influential every day all over the world. It can be from the smallest contrast of opinion to the wars in Afghanistan and Syria. Conflict is a key theme in William Shakespeare's Macbeth. It is evident throughout the play from the initial dialogue which is an example of nature in disharmony 'thunder, lightning and rain' to the end of the play where Macduff is jubilant about his execution of Macbeth 'Hail, king! For so thou art: behold, where stands the usurper's cursed head: the time is free' The witches are the source on the majority of the conflict throughout Macbeth. They are unnatural creatures who are constantly associated with negative imagery 'upon the heath' 'thunder, lighting and rain'. They introduce the physical aspect of conflict in the play by saying 'When the hurly-burly's done, When the battle's lost and won'. When Macbeth and Banquo meet the witches in Act One, Scene Three, Banquo describes them as 'So wither'd and so wild in their attire' and that they 'look not like the inhabitants o' the earth' they deceive the stereotypical women as again Banquo says 'Upon her skinny lips: you should be women, And yet your beards forbid me to interpret, That you are so.' As well has looking extraordinary these women speak of extraordinary prophesies for both Macbeth and Banquo. Macbeth is a character that is accustom to war and violence. ...read more.

This is Macbeth saying that he could kill King Duncan without consequence he would do it. He then shows his internal confliction by saying 'we still have judgment here...which, being taught, return to plague the inventor.' Macbeth is making a case against killing the King as he fears going to hell. He also says that he should be loyal to the king and as his host protect him. Lady Macbeth knows that herself and thirst for power are Macbeths mental weaknesses therefore manipulates Macbeth into killing king Duncan by calling him a coward. Macbeth himself summarises his faults with his final line of act one in which he says "false face must hide what the false heart doth know.' In conclusion, conflict is a key theme in Macbeth and it falls under three types: internal, natural and physical, Macbeth is a physically strong character who is a savage killer on the battlefield. Macbeth is told by the witches that he will become thane of Cawdor and then king. This is a prime example of natural conflict as the witches have superhuman knowledge; these prophecies are the catalyst of Macbeth's internal conflict as he is faced with the decision whether or not to commit the act of regicide. Committing this act leads to the demise of both himself and Lady Macbeth. Every prophecies is meet with more conflict both and physically. ...read more.

'The Hero' is written in an AA rhyme scheme therefore from this alone we can determine that is a more upbeat poem written from a more positive prospective. Owen goes on to tell the reader about one man who didn't fix his mask in time who was 'flound'ring like a man in fire or lime...' he then says that they 'flung him in' a wagon' this statement emphasises the fact that a man who was once a friend and Conrad is now a burden to them. Metaphorically this is similar to 'Macbeth' as originally committing regicide was a good idea until it became the burden that lead to 'Macbeth's' mental breakdown. Later on in the poem Owen goes on to talk about the mental difficulties of seeing a man suffer such a gruesome fate. Owen says 'If in some smothering dreams you too could pace. Behind the wagon that we flung him in, and watch the white eyes writhing in his face, His hanging face, like a devil's sick of sin;' Here Owen is speaking of the mental strain that seeing a Conrad inflicts upon them. It is clear that although this trauma has Owen distraught he is also relieved that it is not him. After reading all of the literature it is apparent that although all the text is written at different periods from the 16th century to the war periods conflict is key throughout. The literature gives different perspectives on conflict due to both their writers and the time periods they were written in. ...read more.

There is some good analysis in this essay, particularly on 'Macbeth'; however the analysis of the two texts and comparing them doesn't really hang together and they would have been better as two separate essays.