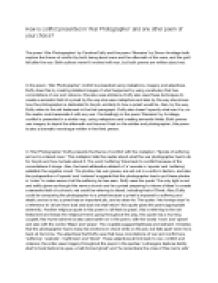 How is conflict presented in War Photographer and Remains by Simon Armitage?

﻿How is conflict presented in ?War Photographer? and one other poem of your choice? The poem ?War Photographer? by Caroline Duffy and the poem ?Remains? by Simon Armitage both explore the theme of conflict by both being about wars and the aftermath of the wars, and the guilt felt after the war. Both authors weren?t involved with war, but both poems are written about war. In the poem, ?War Photographer? conflict is presented using metaphors, imagery and adjectives. Duffy does this by creating detailed images of what happened by using vocabulary that has connotations of war and violence. She also uses sibilance, Duffy also uses these techniques to create a semantic field of a priest by the way she uses metaphors and also by the way she shows how the photographer is dedicated to his job, similarly to how a priest would be. Also, by the way, Duffy refers to the old testament in the first paragraph. Duffy also doesn?t specify what war it is, so the reader could associate it with any war. Contrastingly in the poem ?Remains? by Armitage, conflict is presented in a similar way, using metaphors and creating semantic fields. ...read more.

The adjectives that Duffy uses that have connotations of war and conflict are; ?suffering?, ?explode?, ?nightmare? and ?blood?. These adjectives all link back to war, conflict and violence, the writer uses imagery throughout the poem in the quotes; ?a strangers features faintly start to twist before his eyes, a half-formed ghost? and ?he remembers the cries of this man?s wife? and ?Solutions slop in trays beneath his hands, which did not tremble then though seem to now? , showing the reader that even though he is back in ?Rural England? he can't escape the memories, and how he has to block out what he feels at the moment, but the memories then haunt him later on. Contrastingly, the poem ?Remains? links to conflict as well by using repetition and adjectives that link back to conflict and violence. Armitage uses juxtaposition to shock the reader of this poem, by creating a sharp contrast between the casual conversational tone of the opening stanza and a sudden violent statement. Armitage uses dramatic contrasts to the serious nature of death and war as if the person speaking in the poem finds it hard to process the events that have happened in an adult manner, so then proceeds to process it in a child-like manner. ...read more.

We also see a dramatic contrast in the quote; ?tosses his guts back into his body? because the word ?toss? is not an appropriate word that should be used for a dead body. The quote; 'bloody hands', which could be a reference to Macbeth because he couldn't get the blood off his hands no matter how many time she washed them. Overall I think both poems link back to conflict and are similar because they both include juxtaposition. Duffy uses juxtaposition to create imagery and Armitage uses juxtaposition to shock the reader and create imagery. Both poems give detailed images of what happened, and both present someone who is having a hard time dealing with the guilt of war. Both poems are unnamed warfares and the reader could associate the poem with any war. Both poems are monologues which make it more effective. Both poems present conflict through war, although they are from two different perspectives, as ?War Photographer? is in the third person and ?Remains? is in the first person. Also in ?Remains?, the conflict is actually committed by him, whereas in ?War Photographer? the conflict it photographed by him, this could be two completely different experiences with similar emotions. Both poems make the reader think about the problems that this world has, and also could make the reader melancholy, because of what is described throughout the poems. * ...read more.