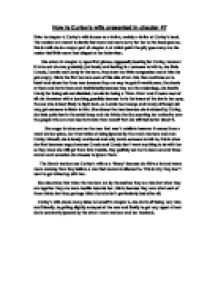 How is Curley's wife presented in chapter 4 of &quot;Of Mice And Men&quot;?

How is Curley's wife presented in chapter 4? Prior to chapter 4, Curley's wife is seen as a victim, mainly a victim at Curley's hand. The readers are meant to slowly feel more and more sorry for her as the book goes on, this is until she is a major part of chapter 4, at which point the pity goes away are the reader feel little more than disgust at her behaviour. She enters in chapter 4, upon first glance, supposedly looking for Curley, however it turns out she was probably just lonely and looking for someone to talk to, she finds Crooks, Lennie and Candy in the barn, they show her little compassion and at this she gets angry, this is the first we have seen of this side of her. ...read more.

a lynching, possibly because he is the lowest of the low in her eyes, the one who is least likely to fight back, as Lennie has George and Candy although old may get someone to listen to him. She abuses the men because she is abused by Curley, she feels quite low in the social heap and she thinks that by asserting her authority over the people who are even less fortunate than herself that she will feel better about it. Her anger is taken out on the men that won't retaliate however it comes from a much darker place, her frustration at being ignored by the ranch workers and even Curley himself, ...read more.

The Ranch workers see Curley's wife as a 'floozy' because she flirts a lot and wears more makeup than they believe a married woman is allowed to. This is why they don't want to get mixed up with her. She also states that when the workers are by themselves they are nice but when they are together they are more hostile towards her, this is because they care what each of them thinks but they perhaps think that she isn't particularly bad after all. Curley's wife shows many sides to herself in chapter 4, she starts off being very nice and friendly, to getting slightly annoyed at the men and finally to get very upset at how she is constantly ignored by the other ranch workers and her husband. ...read more.