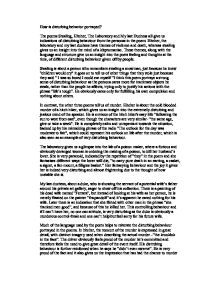 How is disturbing behavior portrayed?

How is disturbing behavior portrayed? The poems Stealing, Hitcher, The Laboratory and My last Duchess all give us indications of disturbing behaviour from the personas in the poem. Hitcher, the laboratory and my last duchess have themes of violence and death, whereas stealing gives us an insight into the mind of a kleptomaniac. These themes, along with the language and structure give us an insight into the poets feeling and thoughts at the time, of different disturbing behaviour given off by people. Stealing is about a person who remembers stealing a snowman, just because he knew "children would cry" it goes on to tell us of other things that they stole just because they said " I was so bored I could eat myself "I think this poem portrays a strong sense of disturbing behaviour as the persona cares more for inanimate objects he steals, rather than the people he affects, trying only to justify his actions with the phrase "life's tough". He obviously cares only for fulfilling his own compulsion and nothing about others. In contrast, the other three poems tell us of murder. Hitcher is about the cold blooded murder of a hitch hiker, which gives us an insight into the extremely disturbing and jealous mind of the speaker. ...read more.

In hitcher, the recount of the murder is expressed in great detail, with distinct imagery used when describing the actual murder -"the krooklok in the face". The driver obviously feels proud of the murder he's committed and therefore feels the need to give great detail of the event itself. His distrubing behaviour is further reinforced when he says he "didn't even swerve". He is very proud of the fact and it also gives us the impression that has had the chance to murder others, thus perfecting his technique; this is also disturbing as he sees the hitcher as not a person but just a chance to further improve his method of chucking people out a moving car. The whole poem has a very sarcastic and proud tone, with matching language, such as the phrase "he said he liked the breeze to run its fingers through his hair", so the driver gave him this literally, by letting the breeze hit him as he was "bouncing off the kerb". The driver sees no repercussions of his actions and doesn't even feel the need to be guilty, which adds him more to his disturbing behaviour. Stealing has a very proud tone to it, backed up by the first sentence in the poem- "The most unusual thing I ever ...read more.

Yet the stanzas 5 and 10 are more concise, showing her thoughts are more focused at this point and I think this is particularly disturbing as it is the points when she thinking of exact details of the murder showing she has clearly thought it out. My last duchess is written with a peculiar mix of rhyme and half rhyme, to perhaps show that there was love in the duke and duchess's relationship, but this was tainted by the dukes controlling nature. His behaviour is disturbing as he couldn't even love without his need for control to step in. In hitcher, the line length is all over the place, mirroring his thoughts and unstable nature, yet the punctuation shows us he can compose himself. I find this disturbing as he is obviously unstable, yet does a great job of hiding it. Finally, the structure f stealing adds incredibly to the disturbing nature of the poem. The line lengths are relatively equal and the whole thing is well punctuated. The persona id clear with their thought and this shows that they know full well what they are doing. To conclude, through the poem the use of themes, language and structure are able to effectively portray the disturbing nature of the main characters n the poems. ...read more.