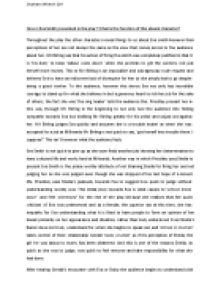 How is Eva Smith presented in the play? What is the function of this absent character?

﻿Charlotte Withell 11H How is Eva Smith presented in the play? What is the function of this absent character? Throughout the play the other characters reveal things to us about Eva smith however their perceptions of her are not always the same as the view that comes across to the audience about her. Mr Birling see that his action of firing Eva smith was completely justified in that it is ?his duty? to keep ?labour costs down? when she protests to get the workers, not just herself more money. This to Mr Birling is an impossible and outrageously rude request and believes Eva to have an indiscreet lack of disrespect for him so she simply had to go despite being a good worker. To the audience, however this shows Eva not only has incredible courage to stand up for what she believes in but a generous heart to risk her job for the sake of others, the fact she was ?the ring leader? tells the audience this. Priestley present her in this way through Mr Birling in the beginning to not only lure the audience into feeling sympathy towards Eva but disliking Mr Birling greatly for his unfair and unjust act against her. Mr Birling judges Eva quickly and assumes she is a trouble maker as when she was accepted for a job at Millwards Mr Birling is not quick to say, ?got herself into trouble there. ...read more.

much better standard of life than the one she is living, but she ?didn?t want to marry (Eric)? as he didn?t her. This shows despite all she?s seen and been through she still believes in love and marrying for love which even Sheila possibly may not consider, wanting to marry above herself, is the normal attitude of middle class in society as they yearn for power and reputation however Eva clings to the last bit of hope she has for her life and humanity; the ability to fall in love was the dream of the lower class as no matter their situation if they fell in love and had someone to support them everything would be better. However after becoming pregnant and being turned away by Mrs Birling?s charity extinguished the thought that love existed in this world and this finally along with her situation drove her to suicide, an escape route from this apathetic society full of people who just did not care. From Mrs Birling it is revealed to the audience that Eva is simply an icon of decency and morality which highlighted through the contrast with the ?cold woman? that Mrs Birling is, not even parenting her children properly. Also Eva refuses to take Eric?s money once she finds out it is stolen which Mrs Birling is incapable of believing since not taken any interest in the lower class of society stereotypes Eva as ?a girl of that sort? and assumes she knows all about these people and so is able to judge them. ...read more.

If the audience did not have a character to relate to and take a liking to and sympathise with this aim would to have been achieved. Eva not only aids the play and the plot but also the message conveyed within. By having Eva as an absent character Priestley not only forces the audience to use their imagination but keeps the focus primarily on the family of the Birling?s and the investigation that is undergoing. This allows the play to concentrate on the society particularly the apathy of the middle class and above, rather than Eva?s life which then aids the plot as we find out more about her and her story from the characters themselves which is an effective way to keep the plot moving whilst leaving the audience with a sense of mystery as we know the outcome but follow the inspector on his investigation to discover the truth. As the story of Eva Smith unravels and is revels to us by the Birling the tension begins to build and the audience is left in suspense. Eva becomes very symbolic in the play and Priestley effectively gives Eva more presence in the play through her absence because of this. In addition she also fulfils the role of a victim, as the audience are aware of her death whilst the other characters try to justify their involvement causing the audience to be less sympathetic towards them which is the result Priestley wanted. ...read more.