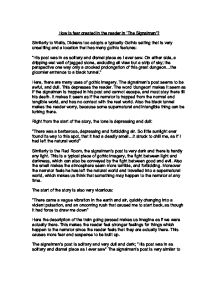 How is fear created in the reader in 'The Signalman'?

How is fear created in the reader in 'The Signalman'? Similarly to Wells, Dickens too adopts a typically Gothic setting that is very unsettling and a location that has many gothic features: "His post was in as solitary and dismal place as I ever saw. On either side, a dripping-wet wall of jagged stone, excluding all view but a strip of sky; the perspective one way only a crooked prolongation of this great dungeon...the gloomier entrance to a black tunnel." Here, there are many uses of gothic imagery. The signalman's post seems to be awful, and dull. This depresses the reader. The word 'dungeon' makes it seem as if the signalman is trapped in his post and cannot escape, and must stay there till his death. It makes it seem as if the narrator is trapped from the normal and tangible world, and has no contact with the real world. Also the black tunnel makes the reader worry, because some supernatural and intangible thing can be lurking there. Right from the start of the story, the tone is depressing and dull: "There was a barbarous, depressing and forbidding air. ...read more.

This causes more fear and suspense to be built up. The signalman's post is solitary and very dull and dark; "His post was in as solitary and dismal place as I ever saw" The signalman's post is very similar to the room in 'The Red Room'. In the Red Room the narrator is trapped in the room just like the signalman is somewhat stuck in his solitary post. Also the dark and gloomy atmosphere in both stories builds up fear in the reader: "The shorter perspective in the other direction terminating the gloomy red light" The 'gloomy' red light makes the atmosphere dull and makes the reader feel sad and unhappy. Also the red light symbolises some gothic features. These include death, danger, blood, and terror. The light is also another piece of gothic imagery. There are many other uses of gothic imagery in the story: "The cutting was extremely deep, and unusually precipitous. It was made through a clammy stone, that became oozier and wetter as I went down" The path towards the signalman's post is very dangerous and is typically gothic. ...read more.