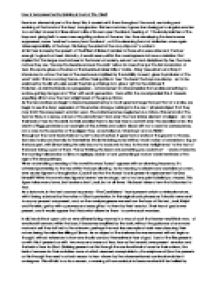 How is fear presented in Lord of the Flies?

How is fear presented by Golding in Lord of The Flies? Fear is an elemental part of the boys' life, it coexists with them throughout the novel, contorting and evolving at the hands of the boys' imagination. This fear mutates, it grows from being just a singular emotion to a catalyst of events; it lives almost a life of its own upon the island, feeding off the lonely isolation of the boys and giving birth to ever more engulfing notions of the emotion. Ever developing the fear is never suppressed, never 'washed to away from the island', until the cleansing hand of civilization once again takes responsibility of the boys-this being the arrival of the navy ship and 'a uniform'. At first fear is merely the speech of the littlest children, harmless to those who were older and 'mature' enough to give it no heed. Maturity, it would seem, within the novel appears to have a definition that implies that the longer one has been in the bosom of society, educated and disciplined by her, the more mature they are. ...read more.

sinister element of religion-sin- for their lack of fear for the devil, for hell, enables them to be truly free to commit even the deadliest of sin. The death of Piggy provides us an example of this, ruthless and cold in blood with not a care for consequence, not a care for the reaction of the religion they once hailed as 'choir boys' and as 'British'. Throughout the novel fear is held on to, left to be attached. It goes from a snake of the ground to the sea, from sea to sky and from sky to themselves. The latter being noted without much notion of understanding on the boys part, with Simon being the only boy not to succumb to fear, for he was 'enlightened' to the fact of the beast being a part of them. 'Fancy thinking the beast was something you could hunt'- words uttered by the taunting hallucination of Simons epilepsy. Said in a tone patronising in nature-a brief reminder of the age of the boys perhaps. When undertaking a reading of the novel the word 'beast' appears with an alarming frequency. ...read more.

It becomes amplified by the dark, without the guidance of one more mature in self they fall foul to the unknown, perhaps the most key example of darkness obscuring their nature being the relentless killing of Simon. As an object of the darkness he was removed without logic or thought, without reference to how one should conduct themselves in fear of god. Lord of the flies presents us with this: it presents us with two ways and means of fear, fear as the forceful, ever present emotion and the lack of fear for God. Goldring presents us this through the continual lack of care for their actions, the lack of remorse for their activities-none of which deemed acceptable by the scriptures of God. He presents us this through the need to attach reason to fear-shown by the aforementioned continual evolution it undergoes. This all told to us for a reason, a warning of how society is to become should it be fuelled by post-war fear and aggression. 'In God we can find salvation', both relevant to his ideology for society and the lack of this recognition to belief from the boys. ...read more.

This is a very interesting essay, which demonstrates a good understanding of the text, but sometimes moves too far away from it in its arguments. With more focus on quotes, clearer expression and effective paragraphing, this essay would have achieved top marks. ****