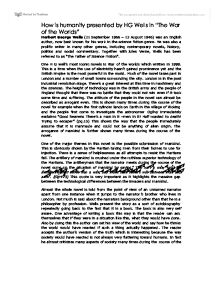 How is humanity presented in War of the worlds

Herbert George Wells (21 September 1866 - 13 August 1946) was an English author, now best known for his work in the science fiction genre. He was also a prolific writer in many other genres, including contemporary novels, history, politics and social commentary. Together with Jules Verne, Wells has been referred to as "The Father of Science Fiction". One H G well's most iconic novels is War of the worlds which written in 1898. This is a time when the use of electricity hasn't gained prominence yet and the British Empire is the most powerful in the world. Much of the novel takes part in London and a number of small towns surrounding the city. London is in the post industrial revolution stage. There's a great interest at this time in machinery and the sciences. The height of technology was in the British army and the people of England thought that there was no battle that they could not win even if it took some time and suffering. The attitude of the people in the novel can almost be described as arrogant even. This is shown many times during the course of the novel for example when the first cylinder lands on Earth in the village of Woking and the people first come to investigate the astronomer Ogilvy immediately exclaims "Good heavens There's a man in it -men in it! ...read more.

Wells alludes to this point by implying that dependence on machines reduces the quality of life. He implies this by contrasting the fast swift and graceful movements of the machines that the Martians bought with them to earth against the Martians themselves who were ungainly clumsy and disgusting beings. He brings out this contrast many time in the novel such as in Chapter 3 Book 2 the narrator say "The contrast between the swift complex movements of these contrivances and the inert panting, clumsiness of their masters was acute, and for days I had to tell myself that these latter were indeed the living of the two things."(pg.133) Here Wells clearly says that if we were to rely too much on machines we would end in a similar state in which the Martians were in were the machines looked more lifelike than the beings. Another main idea that Martians represent in this book is the idea of imperialism. The Martians' unfeeling conquest is meant as a criticism of British imperialism. They subjected those in the colonies such as in India and Africa to a status below that of citizen, and occasionally, below human. In fact if one of the battle scenes in the novel were taken and the word Martians was to be replaced with the British, the Spanish, the French etc and the humans replaced with the Mayans, the Indians, or the aborigines etc the text would still make perfect sense. ...read more.

Again humans are not shown in such a good light. One example is the way an unnamed man jumped in the middle of the road to collect some fallen gold coins just for greed. Although that Wells criticizes a lot of aspect of society like religion and imperialism he redeems mankind in the chapter "Thunderchild". In this chapter many people have boarded a steamer to flee from the Martian tripods alongside the battleship Thunderchild. When a group of Martian tripods pursue the steamer to kill the people on board the battle ship rushes forward to fight the invaders and manages to save the people but sacrificing itself and the crew in the process. This selfless act of the crew on the Thunderchild show that human being do have their good points It is almost as if Wells is reconciling with himself by saying, even though we are flawed in some respects, we also have our redeeming qualities. Altogether HG Wells gives his general impression of mankind through many aspects of his writing. He shows humanity with its many faults and issues like greed, arrogance etc But although the novel is mostly negative about human nature there are points he does recognize that human do have a number of redeeming points such as compassion sacrifice and so on. In all through this novel Mr Wells gives his very interesting take on humanity and how he thinks it will end up in the future. ?? ?? ?? ?? How is humanity presented by HG Wells in "The War of the Worlds" ...read more.