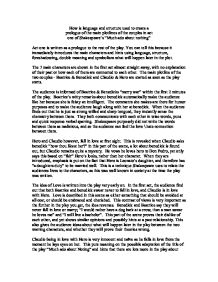 How is language and structure used to create aprologue of the main plotlines of the couples in actone of Shakespeare's &quot;Much ado about nothing&quot;

How is language and structure used to create a prologue of the main plotlines of the couples in act one of Shakespeare's "Much ado about nothing" Act one is written as a prologue to the rest of the play. You can tell this because it immediately introduces the main characters and hints using language, structure, foreshadowing, double meaning and symbolism what will happen later in the plot. The 7 main characters are shown in the first act almost straight away, with no explanation of their past or how each of them are connected to each other. The main plotline of the two couples - Beatrice & Benedick and Claudio & Hero are started as soon as the play starts. The audience is informed of Beatrice & Benedicks "merry war" within the first 2 minutes of the play. Beatrice's witty remarks about benedick automatically make the audience like her because she is feisty an intelligent. The comments she makes are there for humor purposes and to make the audience laugh along with her at benedick. ...read more.

In the first act, the audience find out that both Beatrice and benedick swear never to fall in love, and Claudio is in love with Hero. Love is described in this scene as either something that should be avoided at all cost, or should be embraced and cherished. This contrast of views is very important as the further in the play you get, the idea reverses. Benedick and Beatrice say they will never fall in love or marry; "I would rather have a dog bark at a crow, than a man swear he loves me" and "I will live a bachelor". This part of the scene proves their dislike of each other, and yet shows similar opinions and possibly hints at a past relationship. This also gives the audience ideas about what will happen later in the play between the two warring characters, and whether they will prove their theories wrong. Claudio being in love with Hero is very innocent and na�ve as he falls in love from the moment he lays eyes on her. ...read more.

Beatrice means "the blesser" and benedick means "the blessed one", while Heros name may be in some way connected to the word hero - meaning saviour. Beatrice and benedick use lots of imagery in their verbal sparring such as describing benedick as "a disease" "If he (Claudio) have caught the benedick, it will cost him a thousand pounds 'ere he be cured". Benedick uses the image of a "cuckolds horns"- the sign of a man married to an unfaithful wife - as he would rather have them put on his head than stand under a sign saying "for hire, here stands benedick - the married man!" This imagery is used to show the strength of his opinion, and for comedic reasons. The audience would have understood this joke, and found it very funny as they could relate it to the society they lived in. Act one is almost thought of as a prologue as it introduces the main characters, without explaining anything directly, and uses foreshadowing to make the audience guess what will happen later in the plot. The first act is merely setting the scene for the rest of the play, and the events that occur. ...read more.